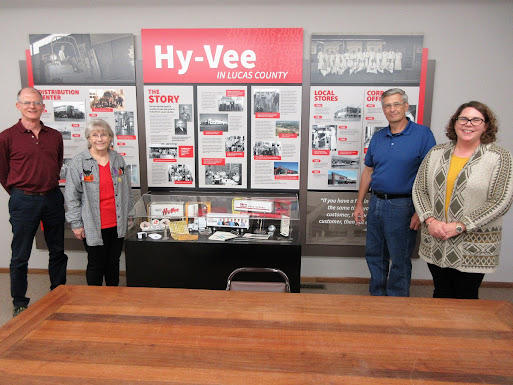 Here's a reminder that the Lucas County Historical Society Museum remains open during regular hours (1 to 4 p.m. Tuesday-Friday) through the end of October, giving anyone interested in seeing close-up our new Hy-Vee display a chance to do so.
Of course there's a lot more to see on the seven-building campus, but the new display is something we're especially excited about. We'll gladly open at other times, too --- just call 774-4464 to make an appointment.
Special guests on Wednesday were Martha Vredenburg and her husband, Mike Kraklow, flanked here by historical society treasurer Ray Meyer (far left) and board member and secretary Kylie Dittmer (far right), who coordinated the Hy-Vee project during the months the display was being developed by Presentations Inc., of Hiawatha.
The new display was funded by a major grant from the Vredenburg Foundation as well as Historical Society resources. Although Martha and her brothers, John and Chuck, saw images of the display during various stages of development, this was the first time family members had seen it in person.
And, yes, we do plan to rearrange some of the furniture in the Perkins Gallery, where the display is located. I'd rather not have had the conference table in this photograph, but it weighs a ton and by the time it occurred to me that it was in the way it was too late to rally the troops and move it.
Posted by Frank D. Myers at 7:13 AM