Short thermometers no longer will shield us 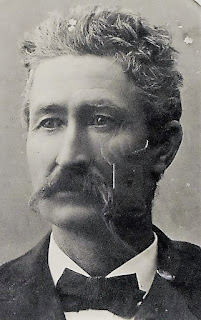 It's been pretty blamed hot here in the south of Iowa during these later days of August 2021, but I cooled down a little after looking back to August 1878 and finding this description in The Chariton Leader of a scorcher late in the month that year (published on Aug. 31):
"Last week the people in this part of Iowa were beginning to cheer up and console themselves with the reflection that the heated time was over. But man proposes and the Lord disposes. Saturday came, and with it came a sulphurous heated current from the regions of Pluto that caused everyone to wilt like a fresh cabbage leaf over a hot furnace. By noon the mercury had risen to 103, and soon after boiled over, so that for the want of a thermometer long enough we will probably never be able to tell how infernally hot it was. Nothing but short thermometers saved the people. Since then, delicious, balmy weather has prevailed, and now we know the hot weather has passed."
The wordsmith was Dan Baker (left), editor of The Leader during the 1870s, who was known far and wide for his way with the language.
Of course our measuring devices these days are digital, so short thermometers no longer will protect us from extreme heat.
Posted by Frank D. Myers at 6:41 AM