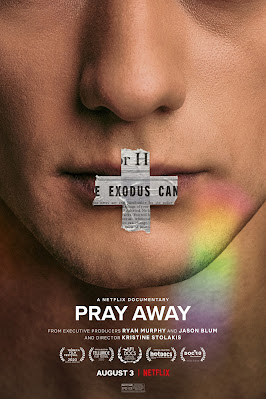 I took time out last evening to watch the new Kristine Stolakis documentary "Pray Away," launched Tuesday on Netflix. The film is an examination of the ex-gay movement, sometimes called conversion therapy, as practiced primarily in evangelical Christian circles.

A principal focus is the rise and fall of Exodus International, an umbrella organization for conversion ministries founded in 1976 and disbanded in 2013 after a majority of its queer organizers had acknowledged over the years that they still were queer --- and the remainder had been confronted by victims of philosophies and practices now scorned by mental health and gender-issues professionals.

In other words, acknowledging that one can't "pray the gay away," a familiar line that provided the title for the film.

Among those featured are Michael Bussee, an Exodus founder who left in 1979 to enter a long-term relationship with another worker in the organization, Gary Cooper, who subsequently died of complications of AIDS; John Paulk, once the organization's poster boy (his ex-wife, Anne Paulk, remains active in ex-gay ministries); and Alan Chambers, president of the organization when it was disbanded.

Another focus is Jeffrey McCall, who identifies as "formerly transgender" and currently leads his own ex-gay organization ---  disbanding Exodus International did not end the practices of local organizations that had operated under its umbrella.

I appreciated especially segments featuring Julie Rodgers, millennial author of "Outlove: A Queer Christian Survival Story," that culminated in her marriage to Amanda Hite before the main altar at Washington National Cathedral.

It's a good, solid film --- and a useful reminder that many evangelical Christians, often with what they consider to be the best of intentions, continue to torture and  in some cases kill, when suicide results, their queer kids. And fail to "convert" even one.