All the news that's fit to trot 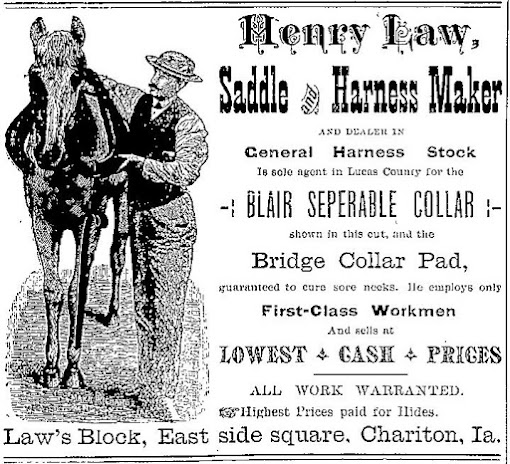 Horses played a huge role in everyday life during the late 19th century --- and that included the content of community newspapers where reports ranging from runaways to breeding and racing triumphs were published regularly.

The advertisement here is from The Chariton Herald of Aug. 6, 1891, when Henry Law's harness shop occupied the ground floor of the building at the northeast corner of the square that now houses the south half of the Iowa Realty offices.

Elsewhere, The Herald of that date reported the return from France of Charles R. Kirk (1858-1917), druggist turned horseman and entrepreneur, with a shipment of French Coach horses. Kirk traveled to France regularly at the time to buy, then export to Lucas County, both Percheron draft horses and a lighter-weight mixed-blood variety known in America as French Coach.

Mr. C.R. Kirk arrived in Chariton with his importation of French Coach  horses at 6 a.m. last Saturday. He bought ten fine horses but unfortunately one of them died of lung fever before arriving here. Mr. Kirk informs us that the horse took marine fever while on the water, ending in the above disease. Everything was done for him that could be, but he died at Albia, 30 miles from Chariton. The other horses are all in good shape, not even getting a scratch, and considering the misfortune of some on the same ship he is very fortunate. One man shipping five horses lost them all before reaching land.

The Herald also reported upon the retirement of "Old Andy," a familiar horse around town who was retiring after 12 years of service propelling the American Express Co. wagon:

"Old Andy," the faithful iron grey Express horse has been laid on the shelf. He is about 16 years old and has been the power of locomotion of the American Express Co's. wagon at Chariton for the last 12 years. He was shipped out here from Chicago to take the place of the  team of bays which will be remembered by the older residents of Chariton as running away at every opportunity, and has been doing honest faithful service ever since. On last Monday the brass trimmed harness were lifted from him and he was taken to the farm of Lewis Bonnett to spend the remainder of his days in lighter toil, and his place is now filled by a four-year-old black with white face. After the new horse gets onto his new work, he will be "in it" in good shape.

But the big news of the week, reported in all three of Chariton's newspapers, was the opening during the next week of Knoxville's Iowa Driving Park, described modestly by its builders and promoters as "the best mile track in the world."

Considerable expertise, effort and expense had gone into construction of the track and its related infrastructure on land located in southwest Knoxville, east of Graceland Cemetery and south of what would become the campus of the Knoxville Veterans Administration Medical Center.

While a success, the track did not live up to long-term expectations and of course, as any Iowan worth his, her or their salt knows, another form of racing won hearts and minds in Knoxville --- and continues to do so. Here's the report from The Patriot of Aug. 5:

The Iowa Driving Park, at Knoxville,, will open its new mile track August 11. All stakes and purses are $1,000 to $2,000. Four days of great races. Twenty-eight horses now paid up in a single race; all races well filled; a record-breaking track. Ladies free first day. Excursion rates on all roads.

The managers of the Iowa Driving Park believe they have the fastest mile track in the world. The track is expected to become one of the greatest race courses in the United States, and the directors and owners feel that a personal visit from the leading journalists of the west this season would be a most fortunate thing for the association.