Travel with the 49ers through Chariton Point 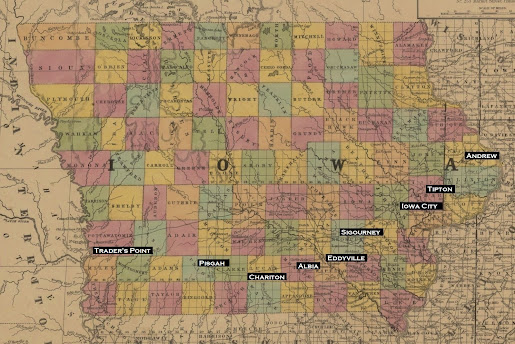 James W. Marshall's discovery at Sutter's Mill, Coloma, on Jan. 24, 1848, launched the California Gold Rush --- that mad dash by an estimated 300,000 fortune seekers to the West Coast that commenced later that year and ended about 1855.

Back in Iowa as 1849 launched and thousands of 49ers prepared to head west, only a handful of permanent settlers had arrived in Lucas County, the county had not yet been organized, the county seat had not been located or named and Buck and Edna Townsend and their family were the only residents of Chariton Point.

Although few traveled during winter months, the Mormon Trail and what was known as the Eddyville Road intersected for practical purposes at the door of the Townsend cabin --- and come spring, this became one of the major routes west through the nation's heartland. Mormon pioneers and settlers aiming for southwest Iowa were among the travelers, but hundreds if not thousands more were in search of gold.

Newspaper stories like the following, published in Dubuque's Weekly Miners' Express of Feb. 6, 1849, under the headline "The Way to the Gold Region" and datelined Andrew were among the reasons.

It may perhaps not be amiss at this time to give a short synopsis of the route from Andrew to Trader's Point, or Council Bluffs, on the Missouri, the nearest and best route to the land of gold. The following road through this State is the one that all emigrants from northern Illinois, Iowa, Wisconsin and Michigan should take in order to secure good stopping places, ferries, plenty of timber, and all other necessary requisites for the emigrants or their teams; the distance will be found very nearly correct.

Here a company is formed, of which A. H. Palmer, former editor of the Iowa Capital Reporter is the corresponding secretary.

From the city cross Iowa river at the ferry; thence to Sigourney in Keokuk county, fifty miles, crossing English river at Wasson & Waters mill; the country is thinly settled; thence to Eddyville, on the Des Moines river, crossing the two forks of Skunk river at the bridges.

From Eddyville twenty-five miles to Albia, Monroe county, some settlers, thence to Chariton Point, the centre of Lucas county; here the large Mormon trail intersects the Eddyville road. This is one of the best roads in the state, twenty miles west of Chariton Point; here there are a few settlers.

Thence to Pisgah, a Mormon town. Thence to Trader's point, on the Missouri river; here there are four or five stores on the opposite side of the river and an Indian agency.

The route has the advantage over the old ones in being some three hundred miles nearer, better timber, water and every way adapted to the wants and wishes of the mover. a glance at the map will show this to be a due west course from Chicago directly east of the South Pass.

There is a company formed at this place consisting now of forty members, exclusive of women and children, who propose to start from here on or about the first of April next, and rendezvous at Trader's Point on the Missouri river on the fifth of May. This company is composed of some of our best citizens; all are active energetic men, many of them possessed of a good share of this world's riches, in fact they are the right kind of boys, and we regret very much to part with them, but if they must leave us we can but admire their enterprising spirit and their determination to visit the land from which it is supposed the immense masses of gold found in the Halls of the Montezumas by Cortes was taken.