"Music at the Museum" this evening ... 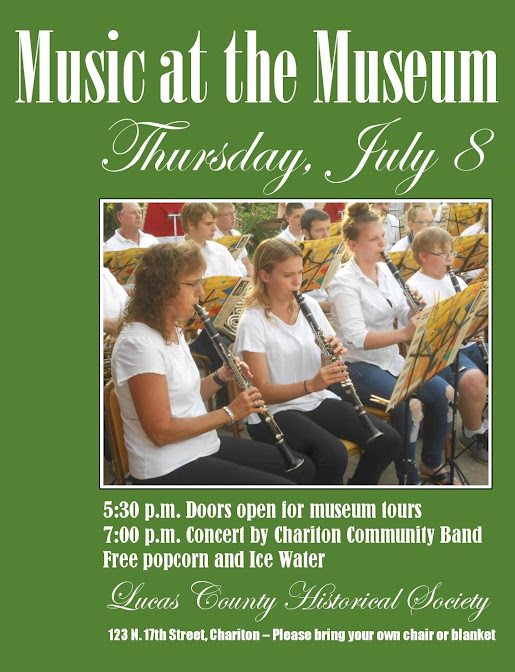 Just a reminder of today's "Music at the Museum" open house at the Lucas County Historical Museum campus. Doors will open at 5:30 p.m. for tours of the buildings and the Chariton Community Band will close out its 2021 summer season with a concert on the grounds of the A.J. Stephens House at 7 p.m.

All are welcome --- no charge. Free popcorn will be served. The weather forecast, so far, is a good one --- relatively cool temperatures and no rain. In the event of rain, the concert would be held in the Pioneer Barn.

Two causes for regret --- the Crist Gallery and the Mine Gallery, both on the lower level of the Lewis Building, will remain closed. While that June vehicular accident on the patio damaged nothing inside the museum, it did crush the pedestrian door into the lower level and damage the overhead door beside it. One door won't open and the other shouldn't be opened unless the reason is compelling (we did get the overhead door raised and lowered so that our 1929 Model-A could be moved out in time for Sunday's July 4th parade).

But we can't allow groups of people into a place that, in case of emergency, is without emergency exits.

Also, we'd ordinarily have served fresh-roasted peanuts rather than popcorn, but the Piper's peanut roaster, while not in the least damaged, is located next to and vented through the Mine Gallery wall damaged in the accident.

A structural engineer examined the damage on Tuesday, confirming what we already suspected --- the building remains structurally sound but repairing the south wall of the Mine Gallery is going to be a complicated task --- both the pedestrian and overhead doors will have to be replaced and portions of the poured concrete wall around the doors and adjacent to the point of impact will have to be cut away and replaced, most likely with frame construction.

There also will have to be a temporary wall in place to seal the building while construction is in progress.

So repairs are going to take time. If anyone wants to see something specific in either of the lower-level galleries, we'll arrange it during regular museum hours. But unfortunately the galleries will remain closed until the damage can be repaired.