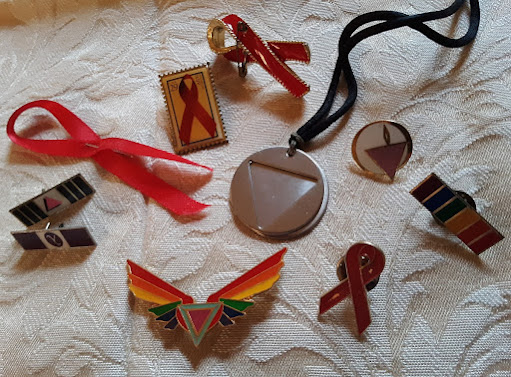 I turned out and sorted through a trinket box the other day, looking for the small AIDS awareness ribbon at lower right, worn so often during the 1990s and beyond that the red enamel is chipping away. I still wear it now and then, when I can find it. And am amazed that I haven't managed to lose it.

The Red Ribbon Project was developed by the New York-based Visual AIDS Awareness Caucus during 1991 and actor Jeremy Irons is credited with wearing the first ribbon at a large-scale public event during the 1991 Tony Awards program.

I started wearing this little pin during 1992, soon after the death of a friend, and wore it most days for many years thereafter.

Someone gave me the AIDS Awareness Stamp pin soon after the stamp itself was issued in 1993, the fabric ribbon was worn at a funeral I think and one of the other pins contains a stylized Unitarian Universalist chalice in the shape of a pink triangle, first used to designate those of us now identified as LGBTQ+ by the Nazis.

There's a backstory for each item and I'm still looking for a few other things.

June is Pride Month --- and one of the things I generally do is make an effort to remember relatives, friends, authors, activists, artists and others whose lives were cut short by AIDS --- in many cases the brightest and best of my generation. And of course the estimated 1.2 million U.S. citizens and millions more worldwide who currently are living with HIV.

So now that it's turned up, I'm going to wear that little red ribbon today.