A "most terrible accident" near Derby 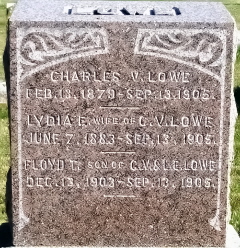 This Find A Grave image of the inscription on the Charles Lowe family stone at Last Chance Cemetery in far southwest Lucas County is less than ideal, but it is possible to see the most notable thing about it --- that mother, father and son all died on the same date, Sept. 13, 1905.

At the time, coal oil was used in the lamps that illuminated most farm homes in Iowa --- and occasionally as a starter fluid for the coal-fired ranges upon which meals were cooked. So it always was kept at hand. Handled carefully, it was not especially dangerous.

But in this instance, adding coal oil to a fire that already was burning --- most likely to encourage newly added coal to ignite faster --- proved fatal for an entire family.

Here's the report of the accident published in The Chariton Leader of Sept. 14, 1905, under the headline, "Family Entirely Wiped Out."

One of the most terrible accidents that we have ever been called upon to record occurred yesterday when the home of Chas. Lowe near Derby was destroyed by fire and Mr. Lowe and his wife and baby were burned to death.

As near as can be learned, the particulars of the sad affair are as follows: Floyd, the little son of Mr. and Mrs. Lowe, aged about one year, was taken seriously ill with convulsions. A physician was summoned by telephone who instructed the parents to bathe the child with hot water until he could arrive on the scene.

In the haste to prepare the hot water the fond father picked up a five gallon can of coal oil and poured some into the stove in which there happened to be a little fire. Instantly a blaze flashed up, there was an explosion, and in less time than it takes to tell it the whole room was ablaze.

Mr. Lowe picked up his wife and child and started to carry them outdoors but when he reached the door he was unable to get it open at once and put his wife and baby down until he could get outside. Overcome by excitement and fright, Mrs. Lowe took the baby and ran back into the burning room. Mr. Lowe was unable to rescue them from the seething mass of flames and just escaped from the house himself, but his injuries were so severe that he lived but a few hours, dying about three o'clock in the afternoon. Mrs. Lowe and baby perished in the flames. The terrible accident occurred yesterday forenoon about 10 o'clock.

Mr. and Mrs. Lowe had been married but about three years and resided about four miles south of Derby on the Van Miller farm. He was about 24 years of age and was a son of John Lowe of Derby and a nephew of the late Joseph Sprott. His wife was 20 years old and was a daughter of Mr. and Mrs. John R. Throckmorton, who now reside a short distance west of Derby.

The funeral services of the ill fated family were held at the Last Chance church today. The affair is an extremely pathetic one and the surviving relatives have the deepest sympathy of all good people.