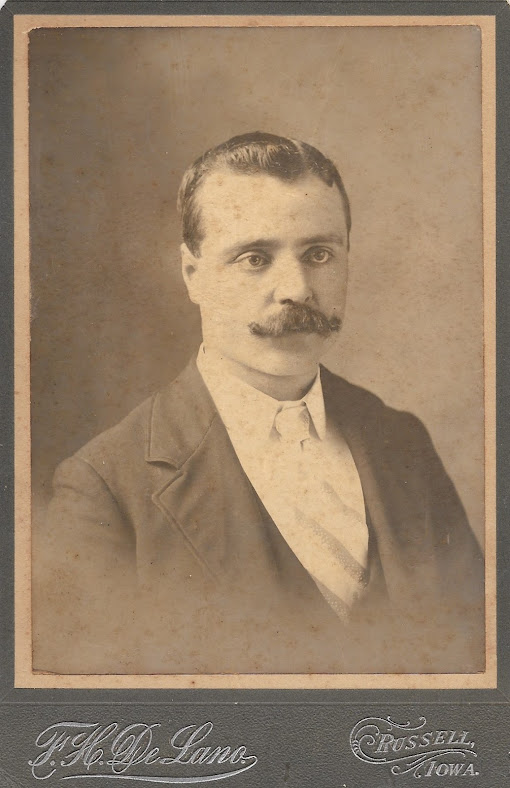 George Beekman Van Arsdale, scion of a once-prominent Lucas County family that has managed to vanish entirely (except for tombstones in the Chariton Cemetery and a variety of artifacts in the Lucas County Historical Society collection), was in his mid-20s and operating a gentleman's clothing shop in Russell when photographed just prior to 1900 with his magnificent mustache.

His parents, Peter Van Der Veer and D'Maris (Van Dorn) Van Arsdale, arrived in Chariton from Illinois during 1872 from Illinois and acquired a large farm astraddle what now is U.S. Highway 34 just east of town that included the forepart of what now is Red Haw State Park.

George was born there during 1873, an only son with four sisters, one of whom died young. Educated in Chariton schools and at a business college in Burlington, he engaged in retail for a time while in his 20s at Russell and elsewhere, then returned home to take over the family farming business.

He married Grace Cheney during 1900 and then returned to Lucas County and life as something of a gentleman farmer. He also became widely known as a community leader in Chariton, serving two terms as mayor in the 1920s and another, in the 1930s. His occupation generally was given as "prominent landowner." The epitaph inscribed on his tombstone reads, "A Man of Honor." And that seems to have been just what he was.

The Van Arsdales had no children. Their relatively modest final home, which they built for themselves, still stands at 815 Grace Avenue. He suffered a stroke there during July of 1942, age 69, and died a week later at St. Joseph's Hospital in Ottumwa. Grace died two years later.

More than 20 years later, soon after the Lucas County Historical Society was organized, the last of the Van Arsdale siblings --- Inda (Van Arsdale) Post, then living with her husband, Charles, in Florida --- packed up many of the smaller Van Arsdale family treasures and shipped them to Chariton to be added to the collection. And that's how this photograph of George made its way home to Lucas County. 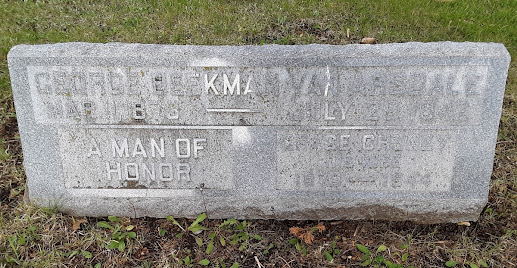