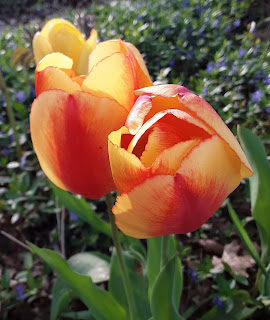 Of course I've always been amazed by the number of tulips on display in Pella during that city's annual festival (approximately 300,000 bulbs are expected to bloom before and during this year's May 6-8 celebration). But the degree of organization needed to plan, launch and carry through this floral extravaganza is impressive, too.
Pella historians tell us that the first Tulip Time was held in 1935, inspired by an operetta entitled "Tulip Time in Pella" performed a couple of weeks earlier by Pella High School students. The event was pulled together in about two weeks and since there were no massive tulip beds then, cabinet-maker George Heeren crafted 125 four-foot wooden tulips that were placed in flagpole holes around the square.
The first full-scale celebration was held during 1936 (85,000 bulbs were planted) and the next year, the community came together to promote the event on an impressive scale, too (keep in mind that print media and the radio were the "mass" media of the time).
The 1937 effort involved recruiting, organizing and costuming 200 volunteers, plus a 54-piece band, to visit nearby communities, including Chariton. The visit to Chariton was scheduled for May 1, 1937, and was promoted by an article on the front page of the Herald-Patriot headlined, "Dutch Parade Planned Here." Here's the story:
+++
Two hundred Pella residents, accompanied by a 54-piece band, will parade in Chariton Saturday afternoon. All members of the delegation will be dressed in Dutch constumes. the Pella group will come here from Osceola and is slated to arrive about 4 p.m.
Permission for the parade has been granted by Mayor Noel Cloud. In a letter requesting permission to visit Chariton it was explained by officials in charge of Pella's Tulip Time festival that the parade is for the purpose of inviting Lucas county residents to the festivities scheduled May 10 to 15.
Approximately six miles of Pella streets are lined with large imported tulips, and in addition Tulip town, featuring more that 12,000 tulips of 100 varieties, will be opened May 10. The event is staged by Pella people to keep alive the traditions and customs of the town which was founded 90 years ago by Dominie H. P. Scholte.
+++
Tulip Time festivities have been cancelled only twice in the event's 86 year run --- during 2020 because of the COVID-19 pandemic and during 1946, when fund-raising events for the people of post-war Holland were held instead.
There will be no parades this year because of the continuing COVID-19 situation and social distancing will be imposed and/or encouraged (and of course masks are encouraged, too), but the tulips are blooming and the celebrating has resumed.
Posted by Frank D. Myers at 7:17 AM