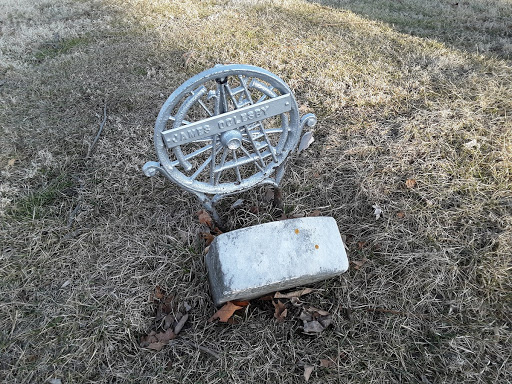 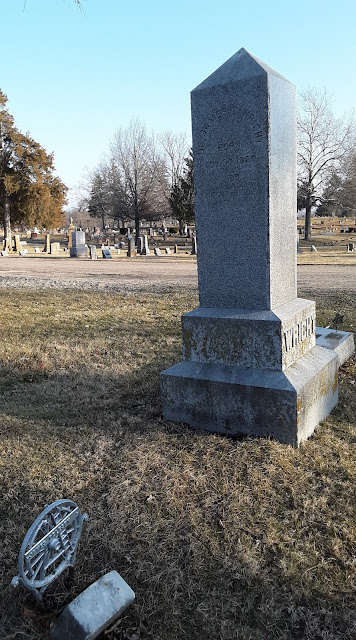 The Chariton Cemetery grave of a young man named James N. Oglevie, who took his own life during late June, 1884, would be unmarked --- were it not for this distinctive Chariton Volunteer Fire Department flag holder.

It's been the practice of Chariton firefighters to decorate the graves of their fallen comrades for Memorial Day since the department was organized back in December of 1877. These hand-forged holders are located throughout the cemetery and many of them, like this one, include name plates.

Actually, the holder should be located just to the north. At some point it's been moved a bit south to the simple Quaker tombstone of James's aunt, Miss Elizabeth C. Evans, who died on Christmas Day 1881.

James, whose parents were Baruch F. and Mary (Evans) Oglevie (or Oglevee), was the youngest son of a large family with few prospects in his native Noble County, Ohio. His father had died during 1880 and soon thereafter James had moved west to make his home with his aunt, Margaret Ann (Evans), and uncle, pioneer Quaker physician James D. Wright.

He had worked at various jobs in and around Chariton, joined the fire department, and then during early 1884 was chosen by his first-cousin, Jenk Wright, to manage the flouring mill he had recently purchased in Lucas.

Those who knew him apparently believed that James had everything to live for and no major concerns, other than, perhaps, mild ones involving his health. So his death, as reported in The Chariton Patriot of July 2, 1884, was a considerable shock:

The community were surprised and greatly shocked by the news that James N. Oglevie, a nephew of Mrs. J.D. Wright, had committed suicide by hanging himself in the flouring mill at Lucas on Saturday morning last. He had been living in Lucas and working in the mill for Jenk Wright since Mr. Wright purchased the mill of Curtis & Sons.

Alvin Dora was working with him, running the engine. On Saturday morning he fired up as usual, but before starting ran upstairs to see if everything was all right, and was horrified to find James Oglevie hanging by the neck cold and dead, suspended from a rafter by a halter rope.

Notice was at once given and a large number gathered at the mill to learn, if possible, all the details of the sad affair. A coroner's jury was summoned who gave, as a result of the inquest, that the deceased came to his death by his own hand.

No motive for the rash act can be assigned. He was in good health, had steady employment, was a young man of cheerful disposition and most excellent character. He was respected by all who knew him, took an active part in all social affairs where he lived. The heart crushing blow comes to his relatives and friends without warning or explanation. He died leaving no sign, not a line or a word by which a possible clue to the cause could be obtained.

He was in Chariton Friday evening and returned to Lucas on train No. 1 about midnight or one o'clock in the morning. A young man by the name of Frank Richards (Richards was editor of The Lucas Ledger) was with him, they going from Chariton to Lucas together. His friend noticed nothing unusual at parting. Mr. Richards went to his home, but Mr. Oglevie must have gone direct to the mill and taken his own life, as the body was cold when found at seven o'clock in the morning. His coat, vest and hat were found hanging in the office. He had lighted the lantern, as it was found near his body, but had burnt out.

The body was brought to Dr. Wright's on Saturday evening, and on Sunday at 9 o'clock, all that was mortal of James N. Oglevie was followed to the cemetery by a large number of the friends of the family. To his widowed mother, who is a sister of Mrs. Wright and lives in Noble county, Ohio, it will be a cruel message of sorrow. He was her youngest child. The profoundest sympathy is felt in this community for all to whom this sad event brings so much trouble.

The story of his death published in The Chariton Leader, also on July 2, was very similar but added a few details about some of the health worries he may have had.

"James N. Oglevie was a native of Noble county, Ohio, where he has a widowed mother, to whom the intelligence will come with a crushing weight of sorrow," that story reads. "He was about 23 years of age, of very good habits, highly esteemed by all who knew him, and about the last man in the county who would have been suspected of suicidal intentions.

"He appeared quite robust and healthy, although he had long feared that some lung trouble from which he suffered would prove fatal, and occasionally he was slightly despondent. He was a son of Mrs. Dr. Wright's sister. He was brought to Chariton Saturday afternoon, at the close of the inquest, and was buried from the residence of Dr. Wright on Sunday morning. His affairs were all in good shape, and the secret of the motive which prompted him to the act of self-destruction will never be disclosed."

And of course we know nothing more about his motive nearly 140 years later than his family and friends did then. But suicide remains a cause of death that in most cases mystifies and horrifies those left behind.

It's amazing how thorough newspaper reporting was back then! Also, crazy to imagine the mother not being being able to be notified immediately.