Evan B. Morgan and the RLDS among the Welsh 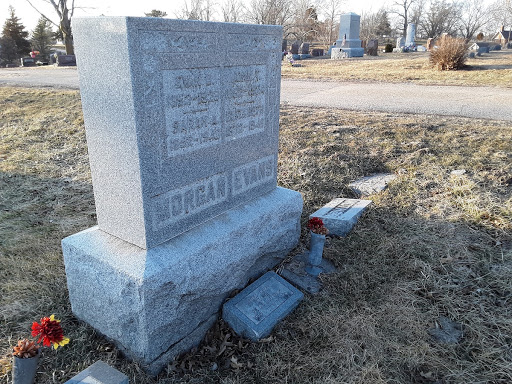 I made my first trip since the big thaw to the Chariton Cemetery late Wednesday for a visit to the graves and Evan B. and Sarah Ann Evans, buried on a hilltop here rather than at Fry Hill --- even though they were Lucas pioneers and residents of first Cleveland and then Lucas for approximately 50 years.
Evan, among the first Welsh coal miners to arrive at Lucas once the big mines had opened in the late 1870s, was a leader in another significant aspect of Welsh history here --- the affiliation of many with the Reorganized Church of Jesus Christ of Latter Day Saints (RLDS), now Community of Christ.
Once upon a time there were three active congregations of this denomination in Lucas County --- in Lucas, at Graceland near Norwood and in Chariton. Today, only the Chariton congregation remains.
+++
The first Mormon missionaries arrived in Wales during 1840, 10 years after Joseph Smith Jr. founded what remains a unique expression of American Christianity. Several thousand were converted and quite a number of those converts, many of them miners, headed for the United States with their families.
The assassination of Smith at Carthage, Illinois, in 1844 altered the scene for the Welsh church. Brigham Young emerged as leader of a majority of the American Saints, leading them west to Utah. But his espousal (and practice) of polygamy poisoned the well for many Welsh converts.
The largest group of "non-Brighamites" coalesced in 1860 around Joseph Smith III, son of the prophet, and emerged as the Reorganized Church of Jesus Christ of Latter Day Saints, moving its headquarters from Plano, Illinois, to Lamoni, Iowa, in 1881.
RLDS missionaries arrived in Wales during 1863 and found rich fields for harvest in congregations established by earlier LDS missionaries. Evan Morgan and members of his extended family were a part of that harvest and their faith accompanied them to Lucas County.
In addition to working in the mines, Elder Morgan was a founder and early leader of the Lucas congregation, an RLDS missionary across the south of Iowa and beyond and, during the opening years of the 20th century, a missionary on four occasion to his native Wales, in 1903, 1906, 1910 and 1912. 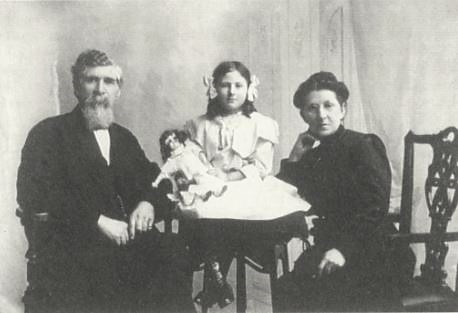 Here's the account of his life published in The Chariton Leader on May 4, 1926, under the headline, "Elder Evan B. Morgan dies." The photo is of Evan, Sarah Ann and their adopted daughter, Viola.
+++
Evan B. Morgan was born May 4, 1853, at Bryn Maur, Beaconshire (Brynmawr, Breconshire), Wales, and departed this life April 30, 1926, at Lucas, Iowa, at the age of 72 years, 11 months and 26 days.
He was born in a Christian home and raised under Christian influences. At the age of 14 years, he united with the Reorganized Church of Jesus Christ of Latter Day Saints. Though young in years he became very devoted to God and his church and at the age of 16 he was ordained to the office of Priest. It was at this age his work as a minister began.
In 1873 he left his native land, the home of his father, and came to America, going directly to Bevier, Mo., making his home for a time with Elder John Watkins. He then went to Des Moines and while living there operated a small coal mine at Runnells, Iowa.
It was while thus employed he went to Sandwich, Ill., and on Dec. 14, 1875, was united in marriage to Miss Sarah Ann Evans, with whom he had become acquainted in Wales. He returned to Des Moines with his bride, but in a short time moved to Lucas where his permanent residence has been for about fifty years. For a time he followed the occupation of mining and labored locally as a minister.
In March, 1883, he was ordained an Elder but still labored as a local minister, preaching at Lucas and surrounding places where opportunity offered, until April 15, 1890, when the General Conference, held at Lamoni, Iowa, ordered his ordination to the office of a Seventy. He at once entered into active missionary work.
In 1903 he received an appointment from the church to do missionary work in Wales, his native land, which he accepted. His wife accompanied him on this mission and assisted in doing her part to reach people with the gospel. They returned from this mission in 1906 and received another appointment in 1910, which they filled and returned in 1912.
While serving the church in this last appointment, they adopted a girl, Viola, now Mrs. Viola Griffith, and brought her with them on their return to America. Mr. Morgan labored as a missionary in various parts of the United States until about six years ago, when, because of age and infirmity, he was superannuated.
During his long residence in Lucas he has been quite active in town affairs, serving several years on the school board, the town council and as mayor of Lucas.
He leaves to mourn their loss his wife, one adopted daughter, Mrs. Viola Griffiths; one sister-in-law, four nephews and five nieces, and a host of other relatives and friends. His has been an active life and he will be missed by his many friends and acquaintances.
Services were held in the Saints church in Lucas on Sunday afternoon at 2 o'clock, conducted by Elder Wm. B. Farley, assisted by Elder Parley Batten, of Chariton. Interment took place in the Chariton cemetery where a short talk was made by Elder Batten, who had been intimately acquainted with Mr. Morgan for more than 40 years. The sympathy of countless friends will go out to the grief stricken wife and other relatives.
Posted by Frank D. Myers at 7:14 AM