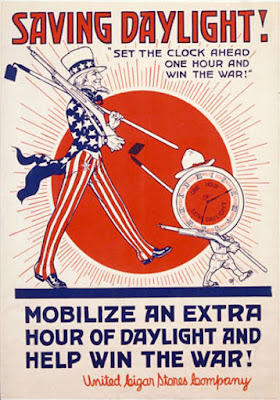 When War Time (we call it daylight saving time these days) arrived in Iowa before dawn on Feb. 9, 1942, it wasn't exactly new.

The practice of moving clocks ahead an hour had been introduced on March 19, 1918, when President Woodrow Wilson signed the Standard Time Act into law. The purpose of one provision of that act was to add an additional hour of daylight to the day in order to save on energy costs during World War I.

Although War Time was repealed after the war ended, the time zones --- introduced by U.S. and Canadian railroads in 1883 when they adopted Sir Sanford Fleming's standard time zone plan --- that also were formalized by the Standard Time Act still are with us.

As World War II accelerated, Congress acted to reimpose daylight saving time in order to conserve fuel and "promote national security and defense." Here's how The Chariton Leader reported the time change on its Feb. 10, 1942, front page under the headline, "Yesterday Was Just Another Day, But ...."

It was just another day for residents of Lucas county yesterday, but it started an hour earlier than usual --- and it started in the dark for most of us.

Yesterday morning at 2 o'clock, Lucas county, along with the rest of the United States and Canada, went on war time. Everyone set his clock an hour ahead.

Most people went on war time Sunday evening so they could get the regular amount of sleep Sunday night, but a good many forgot and consequently lost a full hour's sleep in a fraction of a second.

But people were ready to admit, though, that the change of time has made it mighty early to have to get up in the morning. Although the time has been changed, the sun forgot to change, and so the sun now gets out of bed at about 8:15 instead of 7:15 as it did last week. Which makes it fairly dark outdoors as many of us start to work.

The new time comes through congressional enactment. Legally it can be applied only to common carriers and the federal government. In practice, it is being accepted by most individuals and business firms.

Lucas county farmers on the whole are not enthusiastic about daylight saving. They will tolerate it only as one of the undesirable, although necessary, effects of war.

One of the principal complaints by the farmer, who must work as late as daylight permits, is that stores probably will close before he can get to town after work.

On the farm, daylight saving time works least well during haying and harvest time because the advancing of the clock an hour has no effect on the amount of dew on the hay or small grain.

Daylight saving will save electricity for war factories and give late risers more daylight for outdoor tasks. The clocks will remain fast until six months after the war.

War's end brought an ended to uniform daylight saving time, too --- until 1966, when Congress passed the Uniform Time Act to end the scattershot time variances among the states. Although an annual period of daylight savings time --- April-October at first, now March-November --- then became a federal mandate, states could opt out by legislative act, and Arizona did (although the Navajo Nation didn't).