It's cold (and more hazardous) in Iowa this weekend 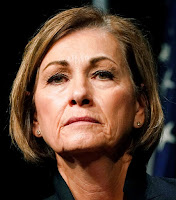 Lucas County Public Health reported four more deaths related to COVID-19 on Friday, bringing the total to 16 in a state where just over 5,000 have been recorded. During the last seven days, 10 new cases have been reported here.
On Monday, the first three cases of a new variant believed to be more infectious than the original were reported in the state.
And those who track such things reported this week that Iowa, along with Missouri and Idaho, is at the bottom of the list so far as percentage of the population who have received at least one dose of the vaccine is concerned --- Iowa at 6.8 percent; Missouri and Idaho, 6.7 percent.
So it makes perfect sense that Gov. Kim Reynolds, late Friday, announced that the safety precautions she has imposed previously by executive order will be lifted entirely on Sunday:
No longer will Iowans be required to wear face coverings in public when around other people for at least 15 minutes; businesses will not be required to limit the number of customers or keep them socially distanced; and there will no longer be a limit on the number of people who can gather in public.
Has Ms. Reynolds, a disciple of the former president, been vaccinated? I don't know, but assume that she has. Elsewhere, it's a challenge to figure out how to get on a list to receive the vaccine let alone receive the inoculations.
All of this, combined with the current intense cold, is making it a little discouraging to be an Iowan this week. It's 9 degrees in Chariton at the moment with an overnight low of minus-10 predicted.
I see that Alaska has a 13.8 percent inoculation rate. The predicted high in Anchorage is 17 today. New Mexico has an 11.1 inoculation rate and weekend highs in the 50s are forecast for Santa Fe. Now that's more like it.
Posted by Frank D. Myers at 7:06 AM