Coming out out there in the country .... 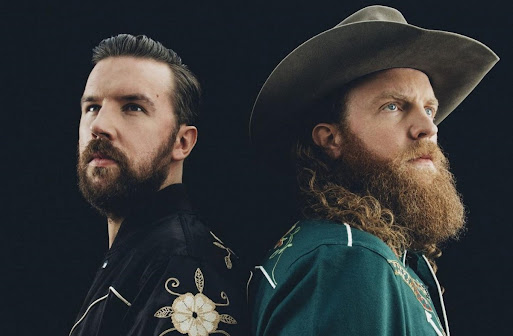 You know it's cold (minus-6 at the moment) when the Cathedral Church of St. Paul cancels the carillon concert that's been standard Sunday morning fare during the pandemic --- that bell tower at High Street and 10th in Des Moines is not heated.

Elsewhere in the music arena, the "outing" of  T.J. Osborne, half (left, above) of the country music duo Brothers Osborne, made the headlines. This was done with his full cooperation in a Time article headlined, "T. J. Osborne Is Ready to Tell His Story." T.J. (Thomas John) and his brother, John (John Thomas) Osborne, have been performing since 2012 and have gathered a large fan base and numerous awards.

I'm not a huge fan of country music, although do enjoy many aspects of it --- especially roots music --- and actually have a substantial collection of George Strait (no pun intended) and other CDs --- not played in years. And I recognize and like several of the Osborne songs, including "Stay A Little Longer."

But I'd never made a particular effort, until yesterday, to really listen to their music.

A country luminary who comes out is guaranteed to generate headlines just because it's so rarely done. Country music generally is considered "red" in our blue-red political and social universe because so many of its fans, especially in the South and Midwest, lean right.

So it will be interesting to watch the long-term fan response, which so far has been generally positive --- give or take the usual Bible-thumpers.

One revelation in the Time piece involved an earlier hit, "21 Summer," written by T.J. and telling the story of a heart-breaker failed relationship. As it turns out, the parties involved were T.J.  and a boyfriend and he felt unable to talk about it at the time, so channeled the emotion into a song.

I watched the "official" marketing video for the song --- the relationship portrayed there is, of course, straight and the female in the equation, a prostitute. Shall we say together, "stereotype"? That I suppose was what the marketers through would appeal to the duo's fan base.

Anyway here's another version of "21 Summer," largely acoustic and without the stereotypical trimming.