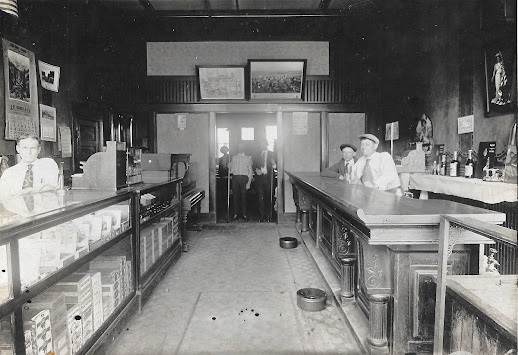 Meredith Willson's Prof. Harold Hill informed us of the hazards of pool, but in Chariton for roughly 30 years during the first half of the 20th century, Chariton's menfolk who patronized Grinnie's Place on North Main Street, just off the square, seemed to have few reservations about this gentlemanly pursuit.
Grinnie was Arlington "Arle" Curtis, who opened the establishment in 1916 after injuries forced him to give up a career as a railroad brakeman. The offerings were simple, cigars, candy, beer and --- through the doors in the distance --- pool. This image from the Lucas County Historical Society collection probably was taken not long after Grinnie's opened.
Mr. Curtis was one of the 11 children of John H. and Mary Ellen Curtis, who operated Chariton's Curtis Broom Factory. Among his siblings were Glenn Curtis, who continued to operate the broom factory after his father's death and donated this image to the society; Dr. Dean Curtis; and Jennie Curtis Yocom, married to Dr. Albert L. Yocom and longtime administrator of Yocom Hospital.
Three of the gentlemen in the photograph are identified, sort of. I'm guessing that Mr. Curtis is at left behind the cash register. The two men behind the bar then would have been Deacon Duckworth and George Palfreyman.
Mr. Curtis died on Dec. 21, 1954, after a long illness, survived by his wife, Cora (Downard) Curtis, and two sons, Roy and Robert.
Posted by Frank D. Myers at 7:18 AM