Thanksgiving in a time of global warfare 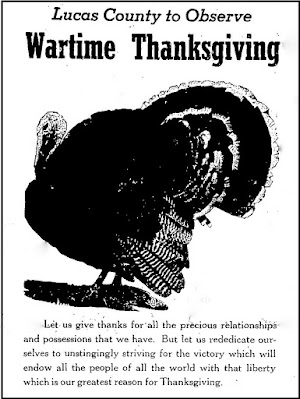 Thanksgiving has a different shape in this year of pandemic, but it's by no means the first to be celebrated in a time of war.

Celebrations during 1942 were the first of those now long-age World War II years for Americans propelled into global conflict just a year earlier when Japanese forces attacked Pearl Harbor. Europe, of course, had been at war since the autumn of 1939.

Near-perfect growing conditions in Iowa during 1942 had resulted in crop records, and for that there was considerable gratitude. But the future was uncertain --- and frightening.

Mandatory nationwide gasoline rationing would begin Dec. 1 and there was a lot of grumbling about that. There was plenty of gas, business interests grumbled, so no need to interfere with commerce (the goal of rationing was to conserve the desperately short U.S. supply of rubber for the war effort by forcing motorists to limit driving).

Here's how The Herald-Patriot of Nov. 26, 1942, reported plans for the celebration that year, accompanied by the cartoon used here as an illustration:

Lucas county citizens will pause with other people in the nation on Thanksgiving Thursday to give thanks for the bountiful harvest that came this year when it was most needed.

A union Thanksgiving service will be held in Chariton at the First Presbyterian church beginning at 10 a.m. for one hour to give everyone an opportunity to pray that the ideal behind our Thanksgiving Day may soon be available to all peoples in the world.

As Lucas county farm products find their way to not only American fighting men all over the world on Thanksgiving but to our Allies as well, turkey will still be the center of attraction in most homes. Cranberries, pumpkin pie and other trimmings will also be present but turkey is still the king on this special day.

And with the greatest harvest in the history of the county virtually complete, heads will be bowed as thanks are given for this blessing and prayers asked that victory will soon be won.

No special events other than the union services are planned. Thanksgiving this year will truly be a family affair with the prospect that highways and transportation systems will be jammed as people spend the last holiday weekend visiting before gas rationing starts.