Back in the summer of 1861, as the first company of Lucas County men raised for Civil War service was being recruited, the women of Chariton were engaged in sewing a large flag that would be presented to these brave men on the morning of Monday, July 8, 1861, then carried by them as they marched away to Burlington to be mustered as Co. B, 6th Iowa Volunteer Infantry.

There were no "flag stores" in those days and state and federal governments, hard-pressed to provide uniforms and weapons, had no supply on hand to distribute.

What neither the women of Chariton nor the men of Company B knew that July morning was that this hand-sewn flag would become the regimental battle flag --- carried into combat for the troops of the 6th to rally around until it was shot to pieces nine months later at the bloody Battle of Shiloh and retired. 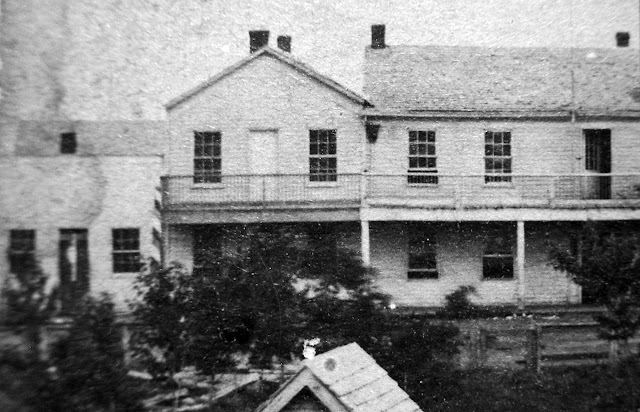 I wrote about the 1861 departure ceremony, including presentation of the flag, back in April of 2016, in a post headlined "Farewell to the Boys of Company B." The front porch of the St. John House hotel (above), then located where Hammer Medical Supply now stands on the south side of the square, was the setting for the ceremony. You can read that post here.

Two and a half years later, during December of 1863, the people of Burlington were raising funds to purchase a new flag for the 6th Iowa Volunteers. Company I, 6th Iowa, the "Colours Company," had been raised largely in Des Moines County and by that time the regiment's second battle flag had been shot to pieces, too, and a new banner was needed.

On Dec. 19, 1863, the following article, authored by "C," was published in The Burlington Weekly Hawk-Eye, outlining the history of the regiment's battle flags, including that tattered banner that had been carried away from Chariton by the boys in blue back in July of 1861:

"The notice in the Hawk-Eye of the 14th inst., calling attention to the propriety of presenting the Sixth Iowa Infantry a National banner suggests to the writer a few incidents that may not be uninteresting to your readers.

"The regiment in question went into service from this place without any provision for their usefulness or comfort having been made, further than such marks of respect or friendship as were tendered to the several companies by the respective communities in which they were organized.

"There were some five or six companies in the regiment that had been presented with flags by their friends; but Company I, from Des Moines county, commanded by Capt. Brydolf, was, I believe, never thus honored. When ascertained that a stand of colors could not be procured from the Government, Co. B of Lucas County tendered their flag for regimental use --- the other flags being sent by the respective companies to the donors for safe keeping, as orders prohibited the use of more than one flag in the organization.

"The flag of Co. B was not a 'regulation National color,' being smaller, and bearing on one stripe some words, the exact import of which I forget. However, if not au fait, the men recognized it as the stars and stripes, and, though not of proper dimensions or of the best material, would as willingly die in its defense.

"This banner was borne through all the affairs in North, Central and South Missiouri, in which the command participated, and finally was completely riddled at the battle of Shiloh.

"The young man who bore the flag during the two days fight at Shiloh, Sergeant Roberts, Co. E, was slightly wounded and the staff was shot away three times while in  his hands. He finally carried it by the stump and bore it through the entire conflict, in the language of his comrades, 'without ever flinching.'

"This flag, I believe, was carried to Memphis, and from thence sent to the Historical Society at Iowa City."

At Memphis, the regiment received its first Government-issue flag which "was borne through the celebrated Central Missouri campaign, and in all of the engagements in which the 6th Iowa participated in South Tennessee and North Mississippi, was carried through the Vicksburg and Jackson campaign; was furled on Lookout Mountain near McLemore Cove before the battle of Chattanooga, and has the honor of being the first flag planted on Mission Ridge in that celebrated battle. On the 23rd of November, during the assault on Tunnel Hill, it was literally shot into ribbons, and only by wrapping the remnants around its staff could its identity as a flag be preserved.

"The gallant Roberts, still Color Sergeant, was hit six times by ball and fragments of shell, and towards the end of the conflict was so injured as to be compelled to relinquish his banner, and was borne to the rear. As soon as he recovered from the shock he left the hospital, returned to the Color Company in time to join in the pursuit of the enemy, carrying the remnants of his beloved banner throughout the entire chase, thence up to Knoxville, where the 6th went to aid in relieving Gen. Burnside.

"In this connection it is entirely proper that mention should be made of the gallant Sergeant Edwards, who has carried the Regimental colors since the battle of Shiloh, with great credit to himself and honor of the command.

"The company from Burlington, Company I, commanded by Capt. Clune, is the Color Company, and will accept with great pride a National color at the hands of their friends at home.

Contributions for the purpose of raising a new flag for the above Regiment will be received at the book stores of J.L. Corse and J.P. Brown."

I don't know what the outcome of this fund-raising effort was, nor am I entirely sure what became of that first battle flag --- carried from Chariton and in use by the 6th Iowa through the Battle of Shiloh. But now we all know a little more about its history.

In 1922, Asa N. Callahan --- Lucas County's last surviving Company B veteran --- believed that the tattered old flag was "on exhibition at the state capitol building in Des Moines." If that were the case, it would have been among the flags sealed in glass cases in the capitol rotunda during 1894 (then sealed into those cases again during 1905 after a major fire in the capitol building).

The original plan had been to allow the flags to deteriorate into dust, in honor of those who carried them. Beginning in 2002, however, the flags were removed gradually and carried away to the Historical Building to see what could be salvaged. So perhaps this grandest of old Lucas County flags still survives.