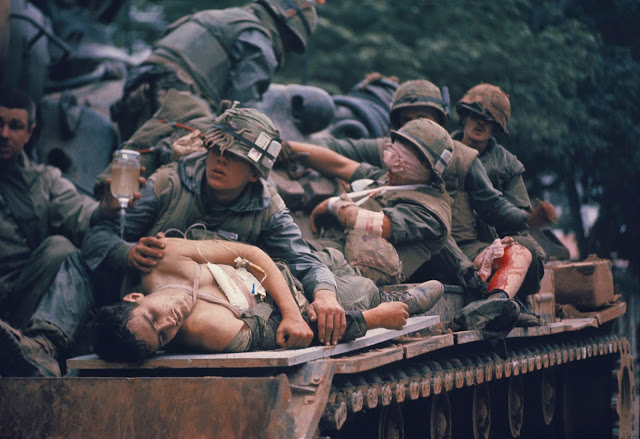 I woke up thinking of a photograph this morning, pre-dawn as reports of world leaders comparing the sizes and efficacy of their "nuclear buttons" circulated on social media. Two little men, but very dangerous and in roughly equal states of dementia, taunting each other.

The image, by accident or design with a power some have compared to Caravaggio with a Nikon, was taken 50 years ago, during February of 1968 in the streets of Hue, by John Olson --- a photographer shooting for Stars & Stripes.

Accompanying Charlie Company, 1st Battalion, 5th Marines, Olson was there during that 24-day battle as U.S. wounded were being evacuated on a Patton Tank. The 18-year-old in the foreground with a hole through his chest is Alvin Bert Grantham of Mobile, Alabama, tended by an unidentified U.S. Navy medical corpsman.

Not long before, assigned to an M-60 machine gun squad, Grantham had pulled four wounded buddies to safety, as well as a weapon, before taking the potentially fatal chest wound. Another buddy with considerable presence of mind saved his life by removing the cellophane wrapping from a pack of cigarettes and shoving it into the wound as blood spurted with each breath, then bandaged the wound and tended him until the corpsman arrived.

Grantham survived --- barely --- and went home to Mobile pieced back together many months later, one of the lucky ones. 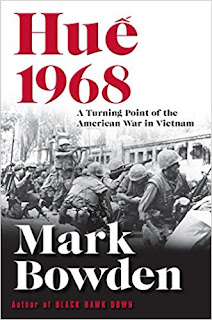 This image and its story are featured in a book by Mark Bowden published at midyear 2017, "Hue 1968: A Turning Point of the American War in Vietnam," that serves as reminder that this cold January will bring the 50th anniversary of the start of the Tet Offensive, which coincided with the start of the Vietnamese lunar new year celebration.

On Jan. 31, 1968, tens of thousands of North Vietnamese regulars, Viet Cong guerrillas and local Communist militias launched some 100 simultaneous attacks on South Vietnamese cities and U.S. military bases. The theory behind the offensive was that the general population would join in, overthrow the South Vietnamese regime, defeat and drive U.S. forces from the country.

That did not happen and allied forces, although taken by surprise, managed to quell the assault effectively --- except in Hue where the battle continued for 24 days, roughly 10,000 --- a majority civilians, but 250 of them U.S. personnel --- died; and a city that had been Vietnam's historic, cultural and imperial capital was destroyed before it was "liberated."

Bowden does not argue that Tet/Hue ended the war --- the war ground on for several more years before the United States declared victory, withdrew and lost.

What Tet --- and Hue --- did do, Bowden suggests, was change the nature of the conversation within the United States where a largely complacent population had heretofore believed reassurances from their leaders that victory was imminent and achievable. Tet exposed fatal weaknesses in the strategy of the U.S. commander, Gen. William Westmoreland, the ineptness of U.S. intelligence services and/or those who interpreted their findings and cast serious doubt on the integrity and truthfulness of the U.S. leadership.

Some have argued that, before Tet, the U.S. was focused on victory in Vietnam; after Tet --- in large part because of the loss of public confidence in the war effort --- on figuring out how to get out without appearing to turn tail and run.

Whatever the case, the Olson image --- published among other places in Life magazine on March 8, 1968 --- helped to introduce the U.S. public to the realities of that far-away war.

If you're interested in reading Mark Bowden's account of the story behind this iconic image, you may do so by following this link to an excerpt published in Vanity Fair last May.

And perhaps remember, too, the realities of war as draft-dodging presidents and lunatic dictators conduct pissing matches that have catastrophic potential.