Pissing on the graves of dead soldiers 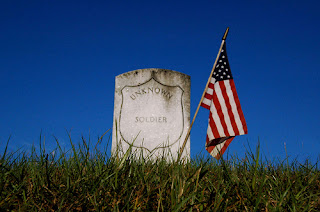 My friend Earl wandered into the museum office Thursday morning on a mission, as generally is the case. He's a (if not the) driving force behind the new Veterans Memorial Park  that has been developing during the last couple of years on the site of the old county jail.

I always enjoy visiting with Earl --- but he is relentless; that's one of the reasons there now is a Veterans Memorial Park rather than a vacant lot.

I've not had much to do with the actual work involved --- many others have. But it's made me happy now and then to serve as kind of an historical consultant.

So Thursday, Earl told me, the time is fast approaching when the names of Lucas County's war dead will be inscribed on big stone panels to be erected at the park --- among the finishing touches.

I'm the one expected to come up with that list of names, based upon years of off-and-on research that continues still. So I'll be reviewing my rosters in the next few weeks, making sure names are spelled right and trying to ensure that no one has been overlooked (someone will be --- that's inevitable; but the names will be arranged so that others can be added later).

If you're under the impression that there are "official" lists of Lucas County's war dead out there somewhere, you would be mistaken.

Working with these names, matching faces when I can find them, adding biographical information, and so on, I sometimes wonder what these young people, frozen in youth eternal during the course of 167 years, would make of the predicaments we've gotten ourselves into since their deaths.

The federal government, for example, began to shut down non-essential services at the midnight just past because neither Republicans nor Democrats would blink when it came time to decide how long a temporary funding extension should last. Chances are, a compromise --- a fairly simple thing --- will come next week. But if so, why not earlier?

We often hear that the "system" is broken, but that's not true. The system is for the most part neutral and it seems to work as well as any, better than many, when women and men of good will have the will to work together for a common good despite their differences.

It's the people who fill the slots within that system --- and those of us who elect them --- who are broken. The responsibility is a collective one and we need to look no further than ourselves to find the sources of whatever evils may be out there. And resolve to do better.

When we fail to realize that, blame others or an abstraction like "the government," and decline to work together for the common good of each other, our states and our nation we are, in effect, pissing on the graves of dead soldiers.
Posted by Frank D. Myers at 7:07 AM