Battle Hymn of the Women ... 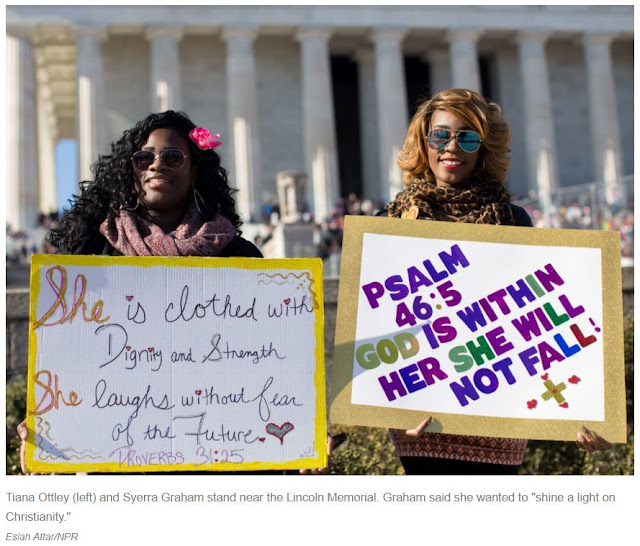 I've been looking at photos and reading about a few of the approximately 600 Women's Marches held across the United States and elsewhere yesterday, including Des Moines. But this photo taken in Washington, D.C., caught my eye on a Sunday morning. It's from the National Public Radio web site.

The subjects are Syerra Graham and Tiana Otley, among an estimated 500,000 marchers who turned out in Washington, D.C., on the day after a largely male Congress and administration managed to shut the U.S. government down.

They were there, Graham said, to "shine a light on Christianity."

"With the people that are in office now, it makes people not want to be Christian," Graham said. "They have such a negative light on it. But, all Christians don't hate."

It's useful to keep that in mind at a time when self-proclaimed Christians with the loudest voices, who actually do seem to hate, are attracting far more attention than their mild-mannered brothers and sisters who occupy less annoying wings of the church.

The Saturday marches, although organized by women, were open to everyone and intended to promote human rights and justice for all --- without regard to gender, race, sexual orientation, immigration status, religious preference and other categories into which many of us fall. Even men, feeling the heat now as millenia of gender privilege begins to crumble.

Here's a little song, "Battle Hymn of the Women," to celebrate the 2018 Women's Marches. The lyrics were written by Meredith Tax back in 1970 and published first in 1971. They remain remarkably relevant.