"Jerusalem" plus "God Save the Queen" 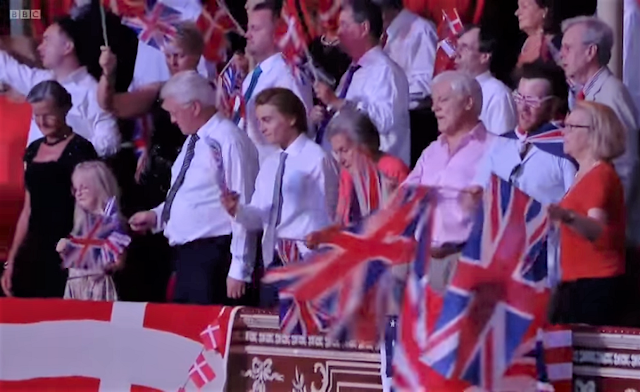 The magnificent, but brief, anthem "Jerusalem" came to mind the other evening while watching a BBC program devoted to the UK's poets laureate. Host Ian Hislop, I'm afraid, wasn't kind to the majority --- including Robert Bridges, who served 1913-1930.

Hislop suggested that Bridge's major contribution during his time of service was the commission given to Sir Hubert Parry in 1916 to set William Blake's 1808 poem, "And did those feet in ancient times ...." to music.

The British people were somewhat downtrodden at a time when it must have seemed as if World War I never would end, so the commission was intended to serve as a rallying point --- and succeeded. Although "God Save the Queen" remains the official national anthem, many prefer "Jerusalem." It often is described as the UK's "unofficial" national anthem in the same sense that many Americans prefer "America the Beautiful" to "Star-Spangled Banner."

"Jerusalem" here has nothing to do with the current kerfuffle about whether or not the geographical Jerusalem should be recognized as the capital of the modern state of Israel nor is it a rallying call for Christian soldiers intent on beating heathens and heretics into submission.

The poem is based on an English legend that the youthful Jesus, during his unknown years, accompanied Joseph of Arimathea, identified as a tin merchant, to England and visited Glastonbury. In it, Jerusalem becomes a metaphor for heaven, a place of universal love and peace. Those "dark satanic mills" are thought to be a reference to the Industrial Revolution, starting at the time the words were written to disrupt a traditional English way of life.

Whatever the case, I'm in the mood for a little "Jerusalem" this morning --- so here it is. And thrown in for good measure on the last night of the Proms 2012, "God Save the Queen."

And did those feet in ancient time,
Walk upon England's mountains green:
And was the holy Lamb of God,
On Englands pleasant pastures seen!

And did the Countenance Divine,
Shine forth upon our clouded hills?
And was Jerusalem builded here,
Among these dark Satanic Mills?

I will not cease from Mental Fight,
Nor shall my Sword sleep in my hand:
Till we have built Jerusalem,
In Englands green & pleasant Land.