A tattooed pig & neighbors from hell 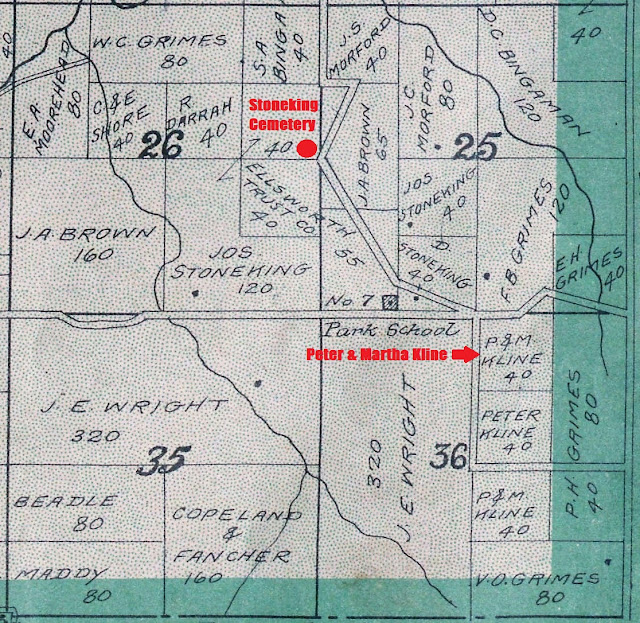 Here's a little story from The Chariton Leader of Jan. 17, 1907, penned by editor Henry Gittinger and describing a case heard in Lucas County District Court that week.

Henry had literary aspirations and sometimes became so wrapped up in the clever manipulation of words that it's difficult to figure out what he was writing about. In this case, however, the narrative flows fairly well, providing you're willing to wade through embellishments such as "hindermost caudal protuberance" to arrive at pig's tail.

It's not clear why he identified the unfortunate pig as "tattooed." It may have been a Spotted hog, called tattooed sometimes because of the configurations on the hides of that breed that resulted during the 19th century in Indiana when early  Poland Chinas were cross-bed with Gloucester Old Spots.

The map shows the general setting of the story --- with Stoneking Cemetery as a landmark. Much of this area by now has been incorporated into Stephens State Forest.

Here's the story, published prominently on Page 1 back in 1907 under the headline, "Pleasant Pastime."

A case of exciting interest and full of hair-breadth escapes and heroic adventures is claiming the attention of the district court this week, entitled "The State of Iowa vs. Martha Kline or The Ruction Caused by the Tattooed Pig." However, the last clause of the title is not on the court calendar as by rights it should be as the proper embellishment for the story writer. The scene of this thrilling passage in the book of human events is laid in Pleasant township, of which, the poet wrote:

"Oh, carry  me back to old Pleasant,
The place where I was born,
Where they raise two rows of pumpkins
Between each other row of corn."

And in this connection it may be proper to mention that Dave Stoneking is the James Whitcomb Riley of the township. But we digress, dismissing all preliminary with the hope that no lasting feud will be stirred up over there on account of the appearance of the tattooed pig in the neighborhood.

According to the narrator, some months ago E.A. Garrison and wife moved onto the Joe Stoneking farm, from Monroe county, "law abiding and peaceable citizen," so the state's attorneys say, and their testimony has never been impeached.

Prior to this, some seventeen years ago, "Peter Kline and wife moved into the neighborhood from Marion county and settled on a broken piece of land and by dint of frugality and industrious perseverance made it blossom as the rose, until the less thrifty in the neighborhood became envious of them and used them despitefully, jeering them until Mrs. Kline became thoroughly disgusted with some of her neighbors." This is what her attorney sets up.

What there happened is the duty of the court and jury to determine.

It seems that the Garrisons and the Klines had ceased to borrow coffee, cornmeal, pot lids and such like of each other through an estrangement, and that a few other neighbors had also severed diplomatic relations with them until one day the volcano was touched off the appearance of the tattooed pig in the vicinity of the Kline home.

The Kline story is this: The pig looked as though it had been badly dealt with and was towsled and mussed up as though it had been fondled carelessly by a brute of the canine breed, more resembling a porcupine than pork product. They cared tenderly for its wants, put it into a straw-cushioned sty, and sent word to the Garrisons to come and get their pig, "without money and without price."

The Garrison story is that the Klines dogged the pig unmercifully, caught it by the hindermost caudal protuberance and unceremoniously and with great violence, alone injurious to the pig's bodily health, hurled it into a rough pen.

The Klines meet this again and say that the Garrisons themselves purposely towsled the pig and placed it in their back yard as a living excuse for a fuss.

At any rate, Angeline Garrison answered Martha Kline's invitation to come and get the pig, but there is no evidence to show that she brought along her knitting with the intention of staying until after dinner. What transpired when they met the angels only know --- and that is what the jury is trying to find out.

Angeline makes two charges in her indictment: In the first place, she was menaced by the defendant with a stick --- in  fact a Rooseveltian club, enough to have scared the life out of a less courageous person and cause her to enter heaven with a well advanced case of the hysterics. In the second place, she (Martha) pointed a double-barreled shot gun at her (Angeline), likely loaded with wrath, "and threatened to make her a fit subject for the attention of the grave digger."

The defendant denies each and every one of these allegations.

The case was tried before J.E. McCorkle, J.P., of Pleasant township, and he assessed a fine of $20 against the defendant. The case comes to the district court on appeal, followed by about 35 sorrowing neighbors and friends of the accuser and accused as witnesses. The case has taken up most of the court's time this week, and the end is not yet.

Later: The case of the State of Iowa vs. Martha Kline went to the jury about 9 o'clock Tuesday evening, and at midnight it brought in a verdict of not guilty. This is the assault and battery case brought from Pleasant township on appeal from J.E. McCorkle's court.

I was not able to track Mr. and Mrs. Garrison down, but Peter and Martha Ann Kline now rest in Bethel Cemetery, some distance southeast of their 1907 home.

Dear Frank Myers, your blog much appreciated. On 9 Feb 2021 I came across it while trying to find out more about my great grandfather James Elliott McCorkle. At 6'4" with red hair, he was among the first Iowans to answer Abraham Lincoln's call. J.E. was in all four years of the Civil War without getting captured or wounded. He returned to Columbia, Iowa, married Caroline Wilson, had 5 children (or more), all but one who died from tuberculosis or diptheria (am searching for which). J.E. remarried in 1882? (his neighbor from the next farm to the east of his), Maria (muh-RYE-uh) Burt, or Bert, and had 8 more children, my grandmother, Minnie Mae McCorkle, among them. I am eager to write a book about him and appreciate your mentioning his name. Your respect for and devotion to the facts are impressive, as those of us who want to preserve those aspects but constantly face a mix of inattention to detail can attest. Am very new at this but hope to read/find more through your blog. Melissa Streeter, Des Moines mkgholson@gmail.com