"Come Out of the Kitchen" and galoshes, too 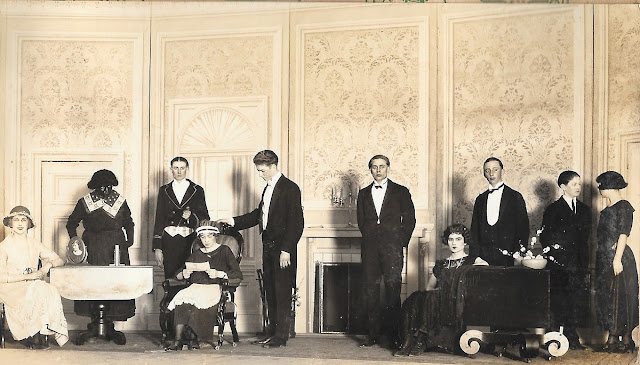 The main block of Chariton High School was brand new back on March 11, 1924, when the junior class presented its play, "Come Out of the Kitchen," in what then was a state of the art auditorium --- long since vanished. Space within the vintage building has been reallocated and the newer Johnson Auditorium is much larger.

These two photographs of the production were published in The Charitonian yearbook of 1923-24, then claimed by Evelyn McKinley, a 1924 graduate, and pasted into her 200-page "Happy School Days" memory book, commenced in 1921 and completed upon graduation.

This book, of standard bookshelf size, is stuffed with photographs, memorabilia, autographs, clippings and more. Evelyn obviously spent a great deal of time filling it and now it's part of the Lucas County Historical Society collection --- in good shape but too fragile to allow unrestricted access to it.

Although cast members are listed in the 1923-24 Charitonian write-up, they are not identified in the photograph. They were Fred Jarvis, Darrel Clark, Clifford Tharp, Harry Wood, Russel Burton, Hugh Larimer, Jessie Storie, Zella Artley, Elizabeth Risser, Marie Barger and Inez Frye. The names of the junior girls who presented a vaudeville-like number featuring galoshes between acts are not listed at all.

Here's how The Charitonian described the play:

"Come Out of the Kitchen," the first class play to be given in the new auditorium, was a decided success. The setting of the play, a Southern home, was brought out very beautifully by the use of antique furnishings.

The 'Galosh' specialty, put on between acts by seventeen Junior girls, was a very pleasing feature which, together with the play itself, formed a very interesting and enjoyable program.

The Story of"Come Out of the Kitchen" is written around a Virginia family of old aristocracy by the name of Daingerfield, who being temporarily embarrassed, decide to rent their home to a rich Yankee." 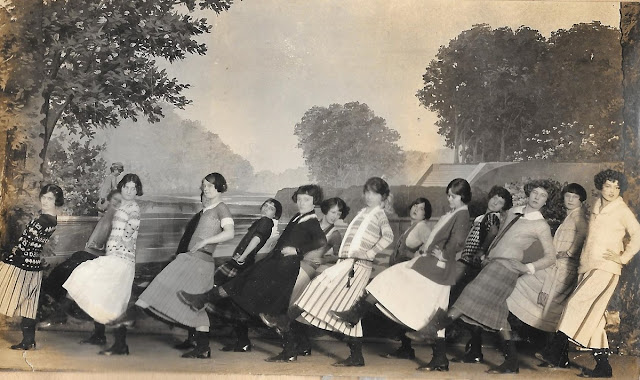 Evelyn, who compiled this little scrapbook, was the only child of Carmi and Elizabeth (Proctor) McKinley, and went on to a long and distinguished career as an educator in Milwaukee --- teaching microbiology to student nurses.

In Milwaukee, she formed an artistic partnership with another Iowan, Helen F. Newhard, and the two became renowned enamelists, based until retirement in Milwaukee, then in St. Augustine, Florida, where they operated a shop in the historic district, traveling to Central City, Colorado, for the summer tourist season.

Evelyn died in St. Augustine on March 18, 1969, but Miss Newhard --- who died during 1992 --- continued to work alone for many years thereafter. If you do a "McKinley Newhard enamel" image search on Google, several examples of their beautiful work --- still admired, displayed and collected --- will turn up.
Posted by Frank D. Myers at 6:18 AM

Hi! I was just doing some genealogy. My great grandmother was Zella Artley. She is listed to be in the photograph. Do you happen to know which one is her? And are there any more pictures available??

Hi Whitney --- The cast members are not identified specifically in the photograph so it's almost impossible to determine which was which. I'm sure there are other photographs of Zella in Chariton yearbooks of the time, but I've not looked to be sure of that.