A young soldier's last will & testament 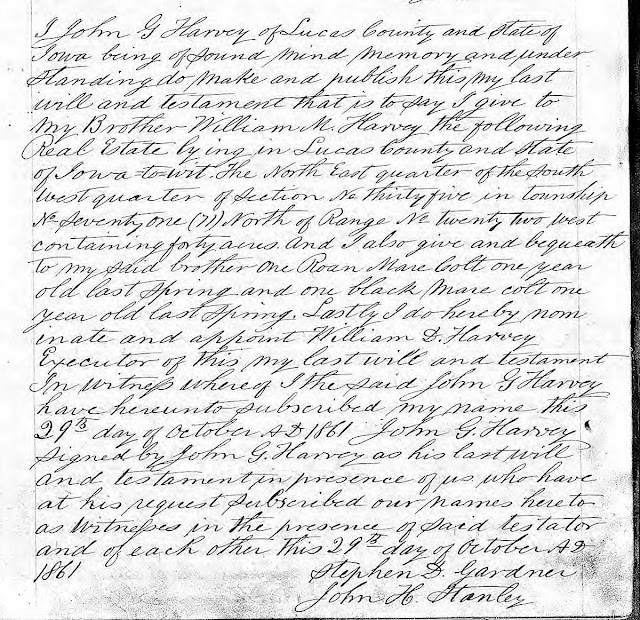 I came across John G. Harvey's will, transcribed into a Lucas County record book, as I was trying yesterday to fit this young man into the family where he belonged. It's a simple document, dated 29 October 1861, phrased in the usual manner of the time:

This is a simple and unremarkable document; its poignancy evident only after a careful reading when armed with knowledge about what followed.

John, age 22 when he enlisted as first corporal in Company C, 13th Iowa Volunteer Infantry, in Chariton on Sept. 28, 1861, was the eldest son of William D. and Polly Harvey, who had brought their family west from Indiana about 1857 and were living on a farm in Warren Township, southwest of Chariton. He had younger siblings Sarah, 18; William M., 14; Joel, 10; and Henry, 4.

Not long after his enlistment --- and the rank first corporal indicates that he was respected by his fellow soldiers and had leadership potential recognized by his superiors --- the company was organized in Chariton and marched off to rendezvous with other companies of the 13th at Camp McClellan near Davenport. It was mustered into federal service on October 28 at Camp McClellan  and the next day, on the 29th, John wrote his last will and testament. The witnesses were his first sergeant, Stephen D. Gardner, and Pvt. John H. Stanley.

It would be interesting to know if John, recognizing his vulnerability, decided on his own to write the will or if, perhaps, officers had suggested to the young men they commanded, now facing danger and death, the wisdom of such a move. Whatever the case, John probably mailed the will home to his father at Chariton soon after it was written and signed.

The 13th was sent downriver to Benton Barracks, near St. Louis, during November where it was equipped and drilled and, on Dec. 11, transferred by rail to Jefferson City, Missouri, where it remained in camp until March of 1862 when ordered back to St. Louis.

Men of the 13th were not involved in combat at Jefferson City, but disease took its toll and on the 15th of January, less than four months after he enlisted, John Harvey died there of lung disease. His remains, most likely, were gathered with others after the war and reinterred in what now is the Jefferson City National Cemetery.

Word of his death reached Chariton during February and on March 3, 1862, John's father took the will to the courthouse in Chariton, it was proved and young William M. Harvey received his legacy.

Meanwhile, the men of the 13th Iowa had been ordered back to St. Louis and then sent on to Pittsburg Landing, Tennessee, arriving there on March 23. The great battle of Shiloh commenced two weeks later, on April 6, and the 13th was fully involved. Company C sustained four battlefield deaths with more to come as the result of wounds.

First Sergeant Stephen D. Gardner survived the combat, but two months later --- on May 29, 1862 --- succumbed to disease while still deployed in Tennessee. Disposition of his remains is unknown.

Pvt. John H. Stanley, shot in the shoulder during the battle at Shiloh, had died of complications two days earlier --- on May 27, 1862, at the military hospital in Keokuk where he had been taken for treatment. His remains apparently were claimed by his family and brought home to Chariton for burial.

And so within the seven months after John's will was signed and witnessed, everyone involved in producing it was dead and gone.