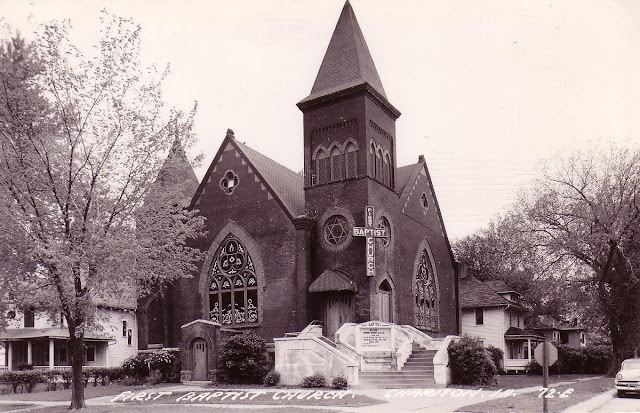 This incarnation of Chariton's First Baptist Church, torn down and replaced many years ago, was brand new back in 1894 --- and the finest church building in town at the time --- on Christmas Eve and Christmas Day, 1894, mild and autumnal, quite unlike this year's frigid, snow-covered holidays.

We know that because Charles D. Brown, editor and publisher of The Chariton Herald, outdid himself when compiling a wrap-up of  Christmas activities for his edition of Thursday, Dec. 27, 1894.

All of the congregations he visited --- or at least touched base with --- still are operational, save the United Presbyterian which eventually merged with what now is First Presbyterian. Some have undergone name changes, however. St. Mary's now is Sacred Heart, for example; the Swedish Lutheran, now First Lutheran.

But none of these congregations are housed in the buildings they occupied back in 1894, including First Baptist, whose fine brick building was constructed during that year. It was torn down 50 years ago and replaced by the current building.

A couple of other changes are worth noting. There was no midnight Mass at St. Mary's, for example; parishioners gathered at 6 a.m. on Christmas morn instead and the circuit-riding priest then hopped aboard a train and traveled to Osceola to celebrate Mass there. And Swedish Lutherans still had the disconcerting habit of arising well before dawn on Christmas Day to celebrate, which explains why the Sunday school program was held on Christmas evening.

Merrily Ring in the Homes and Churches of Chariton.

Many of the Churches Indulge in Christmas Trees and Other Festivities.

How the Day Was Observed in Chariton --- Business Quite Generally Suspended.

It seems to be a matter of universal comment in the section of this mundane sphere in which we are located that the seasons are continually changing and that our winters do not begin until much later in the season than during the good old days of long ago. So far as the weather is concerned it could hardly be said that Tuesday was a typical Christmas for this clime. There was no jingle of sleigh bells and the snow king failed to make his appearance. There was a grey atmosphere and a damp chill in the air the night preceding which merged as the day passed into a very pleasant atmosphere and the weather in the afternoon was a typical Iowa autumnal day. It was a good day to be outdoors, or in; and the people were moving in all directions, on foot and in vehicles, enjoying the bracing and enlivening effects of the day and occasion.

There were a number of family gatherings, neighborly visits and small parties of congenial friends. Movements in business circles were quiet and our merchants quite generally passed the day in social enjoyment with their families. The churches joyously celebrated the Christmastide, bringing gladness and good cheer to the hearts of both old and young with their entertaining and mirth-producing programs. With the exception of the Swedish Lutheran and Catholic, the different churches held their festivities on Christmas eve.

AT THE PRESBYTERIAN CHURCH, "Santa Claus' Dream" was the title of a cantata given by the pupils of the Sunday school, under the able charge of Mrs. Don E. Lewis. The cantata consisted of choruses, recitations, and dialogues; some parts being very amusing while others assumed more of a pathetic nature. Santa Claus, in the peerson of Stant Hatcher, was well represented, with long flowing hair and beard, clothed in the regulation habitiment of that grim personage in whom the little folk take so much interest. The decorations were profuse and attractive. The evergreen tree, heavily laden with beautiful gifts, well filled a corner in the front of the church, while evergreen was festooned in pleasing effect about the room. "Peace on earth, good will to men" was the motto that adorned the front wall while on the sides could be seen a pretty anchor and Roman cross. The program was an excellent one and those participating seemingly enjoyed the merriment as did the large audience assembled.

UNITED PRESBYTERIAN: The anniversary of the Savior's birth was fittingly observed by this congregation with an old time fireplace and cross section of a New England cottage, and the interior of the church presented a strikingly realistic appearance. The program was inaugurated with devotional services by the pastor and the choir. A very entertaining program was executed by the members of the Sunday school that elicited the plaudits of the large audience assembled. Santa Claus, that grim old fellow who brings cheer to many a heart and comfort to the disconsolate, came in a pantomime appropriate for the old fireside and was curiously watched through all his maneuverings. The presents were not numerous as the treat was principally for the little folks. Those having charge of the program, as well as the participants, have reason to be proud of the success achieved.

CHRISTIAN: At the Christian church the commemoration took the form of a large evergreen tree laden with suitable presents for old and young, the distribution of which was preceded by recitations from the little ones by classes, interspersed with songs by the school and selections by the choir, all of which formed an enjoyable occasion highly appreciated by the large audience present. Mr. F.C. Wood was master of ceremonies, and Bro. Fuller was quite conspicuous in his absence (he was portraying Santa).

EPISCOPAL: The decorations at St. Andrews Episcopal church were probably as elaborate as at any other church in the city on Christmas eve, this being the distinguishing feature of their festivities. Evergreens tastefully arranged on a background of white adorned the several windows. A well proportioned and beautifully decorated fir tree was the center of attraction for the juveniles. Several crosses of green and white suspended near the pulpit served to give the decorations a very pretty effect. The program of exercises was not long, and in nearly all the numbers the Sunday school as a whole participated. The excellent music was a pleasing feature. After the distribution of gifs the congregation was dismissed with the benediction by the rector.

The four holy days are being observed by this congregation, beginning with Christmas when Holy Communion was partaken of. Wednesday was St. Stephen's Day. Today (Thursday) is St. John's Day and tomorrow will occur the commemoration of the Holy Innocents. The hour of the services is 10 o'clock a.m.

METHODIST EPISCOPAL: Novel and entertaining was the program at the Methodist church and the exercises which were in charge of the Sunday school, as at the other churches, was well attended by an appreciative audience. A snow tree handsomely decorated and bearing presents for the young folks was the attractive feature, and no pains were spared to make the occasion one of rare enjoyment to both young and old. Sparkling music and recitations, songs., etc., occupied the time. About 9 o'clock the well satisfied audience was dismissed and they repaired to their homes with the thought that they had been royally entertained by the Methodists.

BAPTIST: At the church the fine new edifice was filled to its upmost with light-hearted participants in their holiday festivities. There was a tree laden with dainties and a treat for the Sunday school scholars. The Sunday school took part in the cantata which proved very entertaining and quite novel. Santa Claus, typically portrayed by J.M. Kneeland, had in charge the distribution of the holiday offerings which found their way into the hands of the larger number of those present. The literary features of the entertainment were highly enjoyed.

SWEDISH LUTHERAN: At the Swedish Lutheran church, the Sunday school had a fine time on Christmas night. The handsome decorations were the admiration of all. In the front of the church was the pretty fir tree. A large arch over the pulpit bore burning candles and vari-colored tissue paper. Then in each window were candles, brightly iluminating the spacious room. A large number of the members with their children were present, also many other churches who came to see how their Swedish brethren observe the Christmastide. The program was somewhat lengthy, though well rendered, and was greatly enjoyed by all. The distribution of the large consignment of presents left by Kris Kringle was a joyful feature of the entertainment and the excellent singing by the choir was worthy of special mention.

ST. MARY'S CATHOLIC: The people of this denomination had no Christmas tree. Their services were held Christmas morning. High Mass was observed at 6 o'clock, nearly the entire congregation partaking of communion. Rev. Father Leonard delivered a fine sermon. The music and singing on this occasion were highly enjoyable. Still Mass at 9 o'clock was well attended and it was at this meeting that the little ones received their Christmas treat of sweetmeats and gifts. The church was tastefully decorated with Christmas greens. Father Leonard went to Osceola on No. 3 to conduct High Mass at that place.