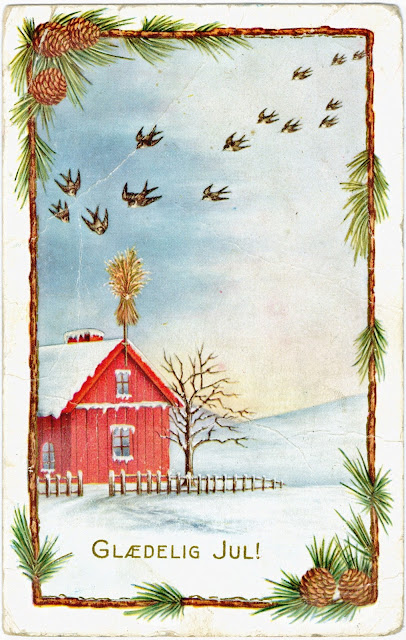 This Christmas card was shared for the first time more than a century ago when it was handed to a little girl named Julia Johnson. I have no idea who gave it to her, but it has survived for a very long time. I've shared it digitally a number of times --- using technology Julia could not have dreamed of.

Julia lived on a farm near the little Winnebago County town of Thompson, Iowa, and attended West Prairie Lutheran Church --- a magnificent white frame building with soaring steeple, long gone, that stood alone on the prairie southeast of town. Her parents were immigrants from Norway.

On the card, birds fly toward a Julenek attached to the ridgepole of the little house. A Julenek, which means "Christmas sheaf," is a sheaf of grain --- oats or wheat --- traditionally attached on Christmas morning to a pole like that shown on the card, or attached to a pole driven into the ground, or just hung somewhere. The idea was (and is) to provide a Christmas meal for the birds, too.

The Julenek in various sizes remains a popular holiday decoration in Norway, although I'm guessing somewhat disassociated now from its original purpose as food and shelter for feathered friends.

May the spirit of Christmas fill your day and be carried forward throughout the year. Glaedelig Jul! It's cold out there this morning. Feed the birds.

Note: Some will know that a West Prairie Lutheran Church still stands in Winnebago County, west of the little town of Leland. This old Lutheran parish divided a century ago in a spat over doctrine and neither faction was willing to give up the name. "East" West Prairie, the newer church, still stands; "West" West Prairie was torn down after its parishioners moved to another building in the town of Thompson.
Posted by Frank D. Myers at 6:28 AM