On the edge of the great Armistice Day blizzard 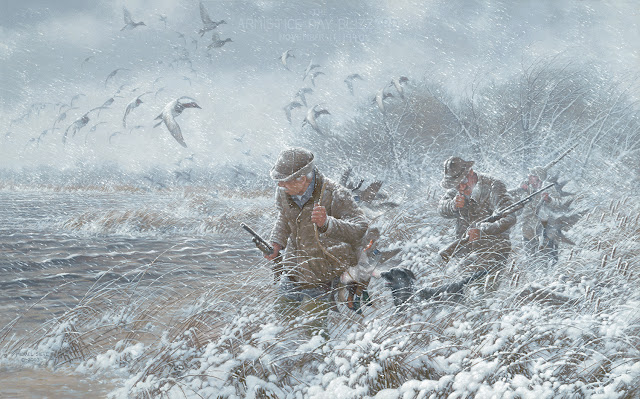 I lived for many years in north Iowa, where for some memories of the great Armistice Day blizzard of 1940 remained vivid.

Also known by some as "the day the duck hunters died," the human toll in the upper Midwest ranged between 150 and 200, many of them duck hunters frozen to death after having been taken by surprise by the storm and mesmerized by the millions of waterfowl driven down by the storm to cover, in some cases solidly, on open water.

The storm also claimed hundreds of thousands of head of livestock --- even a substantial chunk of Iowa's apple trees.

The illustration here is a painting by Minnesota wildlife artist Michael Sieve (poke around via Google and you'll discover where to buy this print and others by the artist). You'll find an excellent article about the storm by Tom Davis headlined "The Day the Duck Hunters Died" at Sporting Classics Daily.

Down here in southern Iowa, the hunting was good, too --- and many hunters were taken by surprise by the storm. But it was less severe and of shorter duration and everyone survived.

Here's a report of the the storm in Lucas County taken from The Leader of Nov. 12, 1940. If it seems a little myopic, keep in mind that the story was written and published before the days of instant communication. Iowans in the south actually did not have a clear idea of the situation in the north until a couple of days had passed. The story was headlined, "Heavy winds, snow drive mercury down."

The icy fingers of Old Man Winter choked short a long streak of mild fall weather last weekend and the old boy jumped on the Middlewest with both feet, sending the mercury dropping downward close to the zero mark.

Friday through Sunday had seen high marks in the 60's with the lowest mark, 33 above, being recorded Friday night. On Monday, the thermometer registered a frigid 12 above and today's low was 6 above.

The chilly weather followed close on the heels of rain last weekend which was reported as measuring .88 of an inch in Chariton and vicinity. The snow which fell blew so hard that no accurate measurement was possible, according to weather observer Harry Osborne.

The wind which accompanied the snow did considerable damage here it was reported. Several branches and trees were blown down. One of the trees fell on a telephone cable on North Grand Street, knocking it to the ground. Service, however, was not disrupted in that vicinity.

About 50 phones north of Chariton were put out of service briefly because of limbs falling on wires, but all lines were open by this morning, telephone company officials reported.

The Iowa Southern Utilities company also reported several cases of "local trouble," all of which have now been taken care of.

The county engineer's office said this morning that roads were all open and that there had been little drifting of the snow. The roads were slippery in some places, it was announced, but all were passable.

The weather was also expected to slow down if not halt entirely the work now being carried on by the Central States Electric Company of Chariton. This company, holder of the local gas franchise, is now replacing all of its old mains with new ones.

The Armistice Day services planned for Monday morning were cut short with members of the local Legion Post merely holding a few brief ceremonies and dispensing with all speeches.

While the weather was giving plenty of people nothing but concern, sportsmen in this vicinity were happy about the whole thing for the duck hunting was never better than it was Monday.

Huge flights were reported yesterday on what some hunters described as the "best day's hunting in Chariton this fall." Most hunters bagged their limit. Late this afternoon, the CCC Camp reported that a flock of at least 500 mallard ducks were in the Red Haw State Park lake.

On Tuesday evening, three Chariton men who had gone to north Iowa to hunt returned home with stories of what they had encountered there, the subject of a (very) brief story in Thursday's Herald-Patriot headlined, "Hunters on polar excursion."

Fred Zimmerman, Guy Williby and Dean Ferguson returned to their homes in Chariton Tuesday evening after a two-day polar excursion to northern Iowa where they had gone ostensibly to hunt pheasants. Their venture led into Emmet County.

There they encountered waist-deep snow, crusted over but not sufficient to carry the weight of a man and occasionally the members of the party broke through.

Birds were killed by the thousands by the storm; cattle were frozen and many hunters gave up trying to hunt and turned to helping farmers save their livestock.