Jessie, Will & their telephone romance 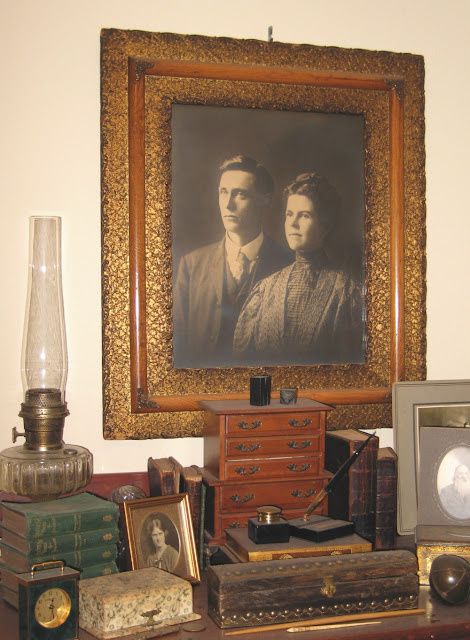 Had it not been for the telephone, still at the turn of the 20th century something of a new-fangled invention, my maternal grandparents might not have met and married.

Granddad, William Ambrose Miller, was treasurer of the English Central Telephone Co. out in English Township and the company switchboard was in the front room of the farm home he shared with his widowed mother and younger siblings. Every time someone in the neighborhood wanted to call someone on a different line, he or she rang "central" and someone in the Miller family ran to the switchboard and made the connnection.

Down in Columbia, just across the Marion County line, the switchboard for the Columbia Mutual Exchange --- a considerably larger operation --- was located in the living room of the home my grandmother, Jessie Frances Brown, shared with her widowed mother and a niece. She performed the same function there, but more often.

A good deal of bookkeeping was involved for both. There was a tiny fee each time one telephone company "switched" through the switchboard of another. So each "long distance" call had to be recorded and once a month or so a financial settlements had to be reached either by mail or in person.

Granddad took to riding horseback down to Columbia in person to settle up with Jessie, they both enjoyed the interaction and on July 3, 1905, Will and Jessie married at the home of Jessie's favorite uncle, Ellis Boswell, just north of Corydon.

Among the results (seven children would come along later) was the following newspaper account, published in The Chariton Herald of Aug. 3, 1905:

W.A. Miller, of English Central, and Miss Jessie Brown, of the Columbia Mutual Telephone exchange, were united in marriage sometime recently, but have not yet furnished us with particulars. We think they are making a mistake, for we make a practice of giving young married folks a kindly "write up" that will be of much benefit to them in introducing them to the cold world.

We can hardly see why these people didn't notify us of their intentions by phone, for we would have guarded their secret with jealous care. However, we will forgive and extend to them our best wishes.

Our acquaintance with Mr. Miller leads us to believe him a gentleman, and surely there are hundreds who know his wife as "Jessie" and will long remember her kindness in the trying position she has occupied, and will unite with us in wishing her unbounded happiness in the love of him she has chosen to be her husband.
Posted by Frank D. Myers at 5:54 AM