An episode a day into the foreseeable future ... 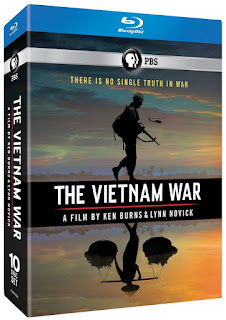 Thanks to UPS, Amazon and 60 bucks, I'm just now sitting down to watch the Lynn Novick-Ken Burns epic, The Vietnam War. Interesting stuff, so far; an episode a night into the immediately foreseeable future.

I'm wondering how many actually watched this all the way through, or plan to. Combat vets get a pass, if they want it --- too much to anger some, trigger deadly memories for others. But the rest of us probably should. The combat fatality footage is extraordinarily difficult to watch.

Although the timeline from French colonialism through Dien Bien Phu and beyond (Episode 1, Deja Vu) was familiar, I certainly learned a lot I didn't know about Ho Chi Minh and his love-hate relationship with the United States.

Another useful reminder from Episode 1 --- the chaotic state the real world was in then (and still is). Childhood and geography shielded me from that chaos; it's good to be better informed.

Burns and Novick argue that major elements of the current chaotic state in the United States can be tracked back to the Vietnam experience, among their stated reasons for making the film. It also often is argued that the crushing blow to our self-image of invincibility (even during World War II) delivered by events of Sept. 11, 2011, are the overriding factor.

Interesting stuff to think about ....

Still watching, too, continuing coverage of the Las Vegas tragedy, disconcerted now and then that none of it seems surprising --- even extraordinary. And certain beyond a reasonable doubt that such things will happen again and again.

I liked the theme of last night's service of remembrance at the Cathedral Church of St. Paul in Des Moines --- lamentation.

Prayers for peace --- unless we attempt to answer them ourselves --- will continue to fall on deaf ears.