Jack Watson & the way to and from Tipperary 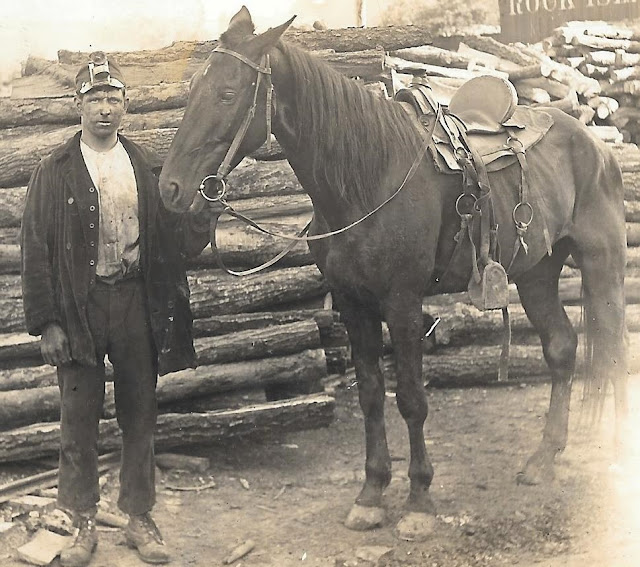 Jack Watson, then in his mid-20s, had just completed a long day in the Tipperary mine at some point between 1914 and 1917 and was preparing to head home when this photo, now in the Lucas County Historical Society collection, was taken.

Thanks to Rose Marie Briggs and her meticulously researched 1990 book, "Tipperary: Gone but not Forgotten," we know that Jack was boarding at the time with the George Pierschbacher family on a farm some distance to the east in English Township and that George had loaned Jack the horse, called Gunpowder, as transportation to and from the mine. George's son, Henry, donated the photo to the historical society many years later.

Jack, whose given name was John, was one of the thousands of miners who passed through Lucas County during its glory days as one Iowa's leading producers of coal between the 1880s and the 1930s. Many of these families remained to enrich their communities, but Jack, after living and working here for about 20 years, ca. 1915-1935, then moved west.

All young men, U.S. citizens or not, were required to register for the draft after World War I broke out and Jack and dozens of other Tipperary miners did this on June 5, 1917. We learn from his registration form that he had served in the  Royal Field Artillery before immigrating; that he was married (although his wife, Ada, may not have joined him in the United States until after the war) and that he was a slight man, some 5-feet 6-inches in height with grey eyes and black hair.

The prevailing legend is that the Tipperary mine took its name from a 1912 British music hall song, "It's a Long Way to Tipperary" because it was indeed, in Lucas County terms, a long way to Tipperary, hidden away among the hills of Pleasant Township, reachable only by dirt roads and a rail spur constructed during 1914. It would be interesting to know if Jack was one of the British miners employed there who christened it --- some years before the song gained popularity in the United States during World War I.

Jack, a naturalized citizen by this time, was called up for service during 1918 and left Tipperary behind for the time being. Deployed to Europe, he saw combat during both the Saint-Mihiel and Meuse-Argonne campaigns, survived and returned to the United States to be honorably discharged during July of 1919.

After the war, Jack returned to Tipperary reunited with his wife, Ada. Their only child, an infant son they named John Jr., was born on Aug. 9, 1920, and died the following day. The baby was buried in the Chariton Cemetery.

By 1926, Tipperary was nearly mined out (it closed in 1927) so Jack found employment in another Central Iowa Fuel Co. mine and the couple moved to Chariton in order to be closer to his work. They continued to live at Chariton until at least 1935, but Lucas County's mining industry was on the decline.

By 1940, Jack had found work as a coal miner at Louisville --- southeast of Boulder in Boulder County, Colorado --- and they were living there when the census of that year was taken. Although 51 at the time, Jack was required to register for a potential draft after the outbreak of World War II and did so on April 27, 1942. By that time, he had gone to work at the new Remington Arms Company plant, part of the Denver Ordnance complex.

The Watsons continued to live in the Boulder area for the remainder of their lives.  Jack died there during 1978 and Ada, in 1987. They are buried at Mountain View Memorial Park in Boulder, a long way from  either Tipperary.