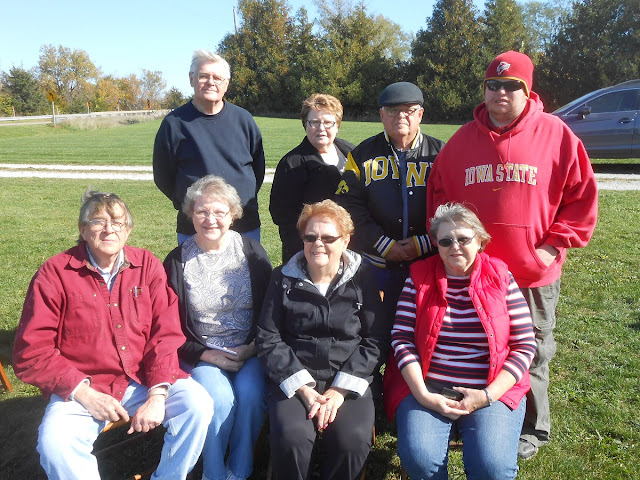 We got to talking after yesterday's interment rites for Richard Wibe at Calvary Cemetery about the fact extended family these days gets together most often when someone dies which, I guess, is just a fact of life.

Richard died Oct. 7 at West Bend, Wisconsin, and his memorial Mass was held on Saturday at St. Ludmila's Church in Cedar Rapids. On Wednesday, Louise Steinbach Wibe, his wife, her sister, Kathy Steinbach Shelton, and Kathy's son, Dan Shelton, brought his ashes down from Cedar Rapids for burial at Calvary and several of us got together for lunch and then the service.

It was a beautiful day, although windy, so these photos might have turned out better had they been taken inside after lunch rather than out at the cemetery, but you do what you can. And keep in mind that the big family gathering was in Cedar Rapids on Saturday.

The top photo is of the Miller side of the family present Wednesday (front row from left) Frank D. Myers, Louise Steinbach Wibe, Colene Greubel Babcock and Kathy Steinbach Shelton; and (second row) Paul Miller, Mary and John Miller and Dan Shelton. Colene, of Newbern, Paul, of Creston, and John, of Lacona, are first-cousins of Louise and Kathy --- children of the late Paul and Veda (Bingham) Miller. The late Paul Miller was the oldest brother of Esther Belle Miller Steinbach, mother of Louise and Kathy and now of Cedar Rapids. Paul, Esther Belle and my late mother, Reefa Miller Myers, were among 40 Miller first-cousins, of whom only Esther Belle and Elizabeth Miller Jordan, of Texas, still are living. I'm confident that explanation makes perfect sense and I told you it was "extended" family.

Interment services for another of those 40 first-cousins, the late Ernest Miller, were held on Saturday at the Chariton Cemetery. 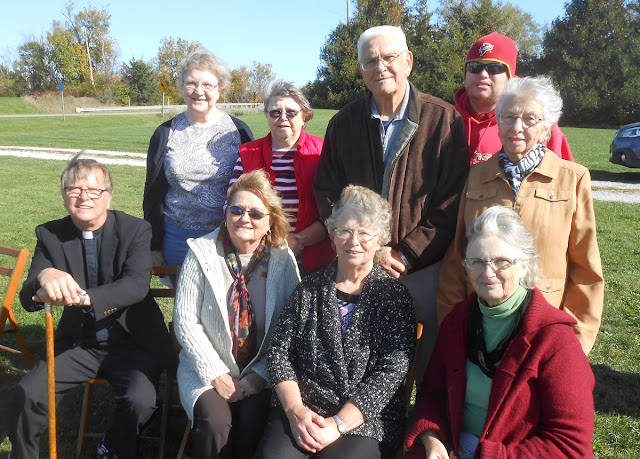 This photo is of the Steinbach side (first row from left) The Rev. Frederick L. Steinbach, who officiated, his wife, Sherry, and two Steinbach cousins from Creston whose names I neglected to collect. Standing are (from left) Louise and Kathy, their uncle and aunt, Leo and Kay Steinbach, and Dan.

Louise, Kathy and their immediate family all were together Saturday in Cedar Rapids. In addition to Louise, Richard is survived by two daughters, Katherine (Wooderick) and Beth (Dingman) and five grandchildren.
Posted by Frank D. Myers at 6:09 AM