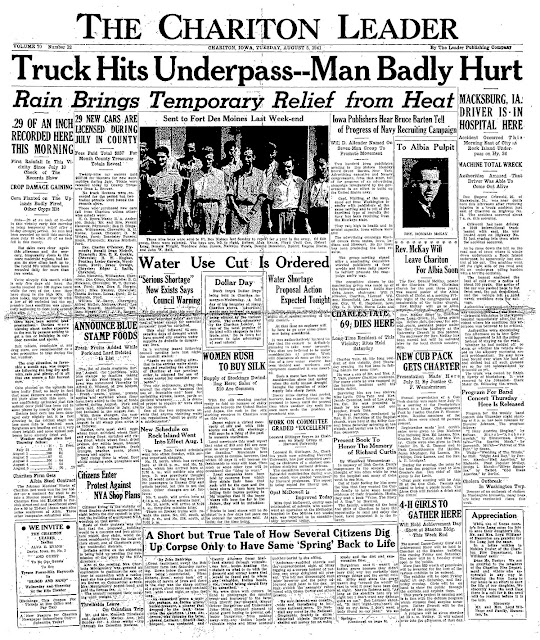 One thing leads to another, so after pulling up this front page of The Chariton Leader from Aug. 5, 1941 --- to investigate the provenance of a pair of Lloyd Moore accident-related photographs --- I started reading other reports on the page.

The accident had merited a banner headline and would result on Aug. 6 at Yocom Hospital in the death from injuries sustained of 25-year-old Rex Griswold of Macksburg. You can see the photos here and, yes, several of us concluded yesterday that the photos did depict the accident in which Griswold was fatally injured.

But what we have here in total, I think, is a snapshot --- in print rather than photographic form --- of a day 76 years ago when Lucas Countyans were suspended on the edge of what would be known as World War II. The signs of its imminence were everywhere, but the Japanese attack on Pearl Harbor was still four months away.

There's a funny story at the bottom of the page that I'll conclude this post with. It was written by a youthful John D. Baldridge, then 27 and still single. The Bloomfield-based Baldridge family was the major stakeholder in an outfit that became known as the "ABC" newspapers --- Albia, Bloomfield and Chariton --- and John had landed in Chariton during the fall of 1938 as advertising manager for The Leader and Herald-Patriot.

Each of those newspapers had a distinguished editor of its own during those years, but John transitioned during the early 1940s into news editor, cranking out copy for both. He had married Eleanor Ann Perry during early 1939, moved into an apartment above the newspaper offices, and as it turned out, would spend the remainder of his professional life as principal chronicler of Lucas County and its people although years of service in the U.S. Navy, 1943-1946, and as a civilian in Korea, 1949-1950, would interrupt.

It had been a hot and dry summer in Lucas County, crops and livestock were under stress --- and the water was short. Lake Morris, the second of two city reservoirs, had not yet been built.

The signs of impending war were evident on the page.  The principal photograph was of nine "boys" who had reported to Fort Des Moines the preceding Sunday, drafted into military service. Six would be accepted; three would return home.

Tensions with Japan were increasing and because Japan controlled the silk market, the supply of women's stockings was endangered. "Women rush to buy silk," The Leader reported.

Neighbors along West Braden Avenue were fussing in "not-in-my-neighborhood" form about plans to build a National Youth Administration shop --- to train young people in useful trades --- nearby. The war would resolve the issue. Young men went off to war; women, into the jobs they left vacant. Little formal training for either provided.

"Blue Stamp foods," announced elsewhere on the page, were part of the first phase of the U.S. Food Stamp program which, at the time, had two purposes --- to assist poor  families nutritionally and to encourage the consumption of surplus agricultural commodities. Eligible families purchased red (or orange) stamps that could be used to purchase most food, then were given blue stamps that could be traded for whatever produce and commodities the government had declared to be in surplus at the time.

Polio increasingly was a threat, especially to youngsters, and Lucas County had invested in an iron lung. Look in the lower right hand corner of the page and you'll find an "Appreciation" from the Loyd Williams family, of Humeston. The Chariton Fire Department and others had transported and installed the lung in the family home, hoping to save their daughter, Phyllis, age 12. Although she died, the family was grateful for the effort.

Finally, here's the light-hearted story with John Baldridge's byline that caught my eye in the first place: "A Short but True Tale of How Several Citizens Dig Up Corpse Only to Have Same 'Spring' Back to Life." The Robert Larimer farm was located in Benton Township, a mile south of Salem Cemetery along the New York Road:

"Great excitement swept the Bob Larimer farm last Saturday morning. Down below the barn a pond was being constructed. When Robert Bros.' scoop took off a couple of layers of Iowa soil, there in the clay was the sharp outline of a grave, about three and one-half feet wide and eight or nine feet long.

"An unmarked grave (of) a murderer perhaps, an Indian grave, buried treasure, a pioneer that dropped by the trail, these were the questions. Ivan Anderson, who operates the farm, phoned Larimer. Sheriff Ray Shepard was contacted and County Attorney Oscar Stafford started through the voluminous law books hunting the statute on what to do with the decayed and wormy bones that would be found and to whom any valuables, Indian heads, etc., would belong should they be unearthed.

"We were there with the camera in hand to photograph the epochal event and journeyed to the farm with Sheriff Ray Sheperd, Mayor Grover Burgstrum and Undertaker John Miley. Shepard planned to stand guard, hoping to prevent collector Burgstrum from making away with any Indian heads or valuable rocks and Miley scented another burial in the offing.

"Anderson supplied shovels and the unprecedented sight of Miley digging up a corpse instead of putting one away delighted all present. The hot sun discouraged such labor however and the party adjourned until later in the day. At four o'clock the assembly reconvened with Glenn Curtis and others present.

"By now interest was county-wide and threatening to become national news. To forestall any move by the National Geographic Society to claim historical objects, Bergstrum shelled out money for an extra spade and the dirt and conversation flew.

Burgstrum said it wasn't an Indian grave because they didn't bury that way, but curiosity does strange things and the sweat rolled. Miley said since the grave wasn't dug "around the world" or east to west it must have been dug at night. Marvin Roberts said, "As long as the sheriff's here it's all right, but I don't want any damage suits on me." Bob Larimer shouted, "It isn't right --- you can't do this on my farm. I don't want a body found on my land." We sat down in the shade and watched.

"Finally a spade hit a timber and the crowd inched up to the hole. The wood, ancient and rotten, was carefully examined. Suspense ran high when suddenly the spade went clear to China and the water boiled.

"The temperature had been 101 and rose to 103 as Luther Keller, who lives nearby, walked over the hill. "Luther, who's buried here?" someone asked.

"We then, in the resulting confusion, suggested Roberts run an ad that he not only digs ponds but supplies the water, too. Miley suggested that Larimer stop digging the pond and pipe the spring into a tank. Roberts fainted at this.

"Someone said it was a good joke on somebody. All present started unobtrusively for home. We think Ivan Anderson and Bob Larimer should be thankful that the Creator put the curiosity bug in the human brain. Mr. Spring lives again."

Finally here's a photo of Eleanor and John Baldridge (right) with Patsy Hixenbaugh in the foreground, taken during 1955 at the famous Mallory Castle Rotary anniversary party.  The only reason it's here is because it's the only photo of  that Baldridge I could find on short notice. 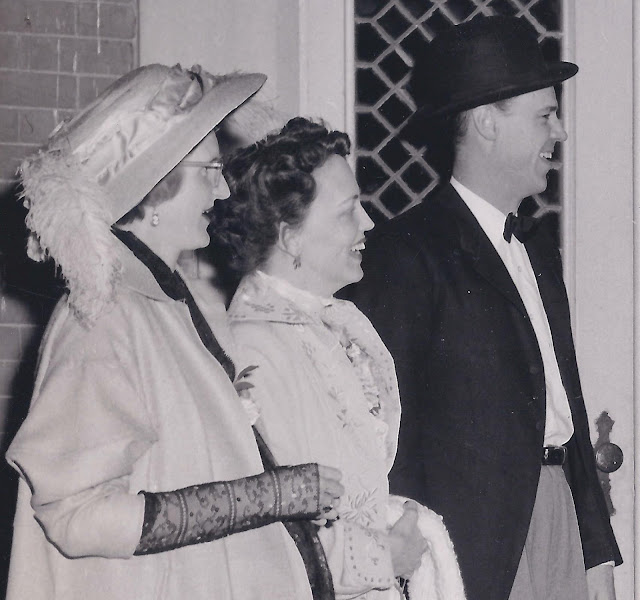