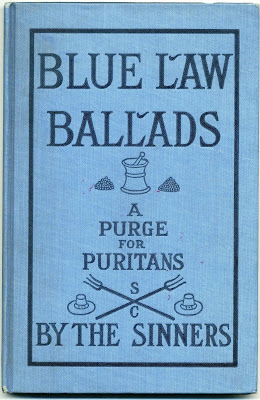 Few vestiges remain of Iowa blue laws --- a somewhat odd ban on Sunday auto sales practically the last if I'm not mistaken. But these prohibitions against doing this or that on the Christian sabbath were widespread and in some cases hotly contested in Iowa and elsewhere well into the 20th century (The slim volume of lampooning poetry, "Blue Law Ballads," was published in Cincinnati during 1922).

Back in June of 1883, Chariton's City Council directed local law enforcement to start enforcing a rather strict blue law that had been on the books for some time, resulting in an editorial outburst followed by more abbreviated sputtering by John Dravo Hull, then editor and publisher of The Democrat-Leader, in his edition of June 13:

"Curses, deep and loud, were freely indulged in on last Sunday morning in Chariton, on account of the enforcement of one of the city ordinances which provides ---

'The provisions of this ordinance shall not be construed as preventing works of charity or of necessity.

'It shall be unlawful for any person, within the limits of the city, to purchase, on Sunday, any article or thing which by this ordinance is prohibited from being sold on Sunday.'

"But the curses came only from the ungodly portion of the community, those who are so void of moral and religious training that they do not know what a heinous crime it is to purchase, on Sunday, a morning paper, a cigar, a loaf of bread, a quart of milk, a few fresh rolls, a nice dish of ice cream, a glass of lemonade, a piece of fresh meat out of a refrigerator, or any thing else which is calculated to produce contentment and happiness on the day of rest.

"It is high time this ungodly element in the community should be taught a lesson that they will not forget. They should be taught the great lesson that Sunday is not a day of rest and recreation from the toils and cares of the week, but that it should be observed as a day when men are required to crucify their bodies for the good of their souls. The city council have addressed themselves to the tasks of teaching the people of this community that Sunday must be observed according to the peculiar views and notions of those who make the question of morals their daily study through the six days of the week, and who on Sunday devote their energies to delving into the Divine law as contained in the latest 'revised edition' and formulating therefrom a code of religious rule from which there can be no appeal.

"It is high time the ungodly element in this city should waken up to the fact that, instead of cursing these great and good teachers of morals, they should learn to look up to them with confidence and reverence and adopt their views with becoming meekness and humility."

Meekness and humility were not, however, Editor Hull's chosen path and he continued to snipe at enforcement of the blue laws elsewhere on the page:

"The citizens of Chariton will now have to eat enough ice cream on Saturday to last them until Monday."

"To comply with the Sunday ordinance of Chariton, the Patriot will have to get out two issues on Saturday, one dated Saturday and the other Sunday. Then the buyer can lay the latter away to read on Sunday morning."

"If any man in Chariton should attempt to buy a cigar on Sunday he will have to 'smoke' for it."

"A citizen of Chariton who forgets on Sunday to lay in a supply of tobacco must es-chew it on Sunday."

"Notwithstanding all the furor over the action of the city council on the Sunday question, no arrests have been made up to the time of going to press, and it is not probable that any informations will be filed. There is little doubt but that everything will be as of yore on next Sunday. These spasmodic efforts to retrograde a few hundred years have only to be let alone a few days and they then die of a disease known as contempt."

Just as editor Hull predicted, the excitement died down during the following week after the city council, while not reversing itself, did direct its officers not to actively pursue evil-doers. Instead, they were to await complaints filed by one citizen against another. That apparently slowed the pursuit of righteousness --- during 1883 at least.