Lucas County will honor three of its POW/MIA dead

Singled out for special recognition will be three young men from Lucas County who were killed in Korea but whose remains never have been recovered. Officially, according to the Defense POW/MIA Accounting Agency,  7,729 U.S. troops who died in Korea are among the 82,473 U.S. missing after World War II, Korea, Vietnam and later conflicts.

Here's a little bit about the three young men who will be recognized on Friday.

Anna Musick, of Chariton, received word in late September, 1950, that her son, George (above), 33, a decorated veteran of World War II, had been reported missing as of Sept. 3 in Korea.

A son of Andrew and Anna Musick, born during 1917 in Monroe County, George was a veteran of World War II who had re-enlisted in the Army following an honorable discharge, most recently just two months prior to his death. In addition to his mother (Andrew Musick died during 1947), George was survived by three brothers, Frank, John and Andrew; and by two sisters, Mrs. Wayne Trumbull and Mrs. John Grennet. 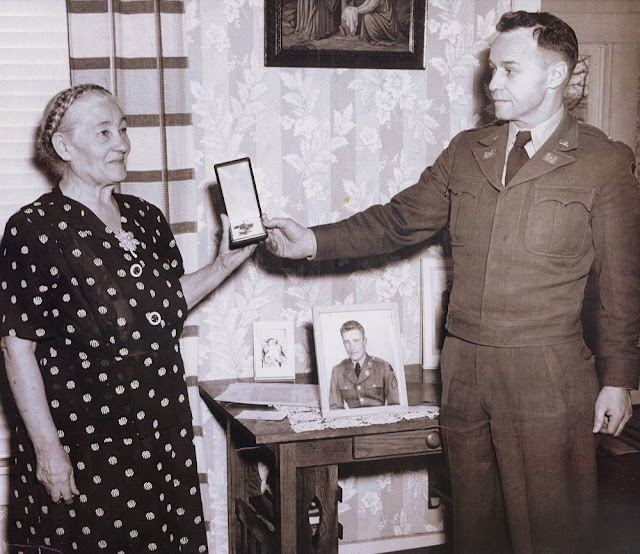 George, who had earned the Silver Star Medal with Oak Leaf Cluster for valor during World War II, was awarded posthumously the Bronze Star Medal with “V” Device for valor in Korea, accepted by his mother during a ceremony in Chariton in March of 1951. The citation that accompanied the medal tells us how he died.

George was part of a small group of men from a heavy weapons company cut off and surrounded by the enemy near Yongsan on Aug. 31, 1950. The group formed a defensive perimeter and dug in, holding off constant assaults from Sept. 1-3. Rations were low and the only water the men had was the morning dew. According to the citation, Musick’s valor in these circumstances continued until death claimed him; the survivors telling and retelling the record of his bravery.

George’s remains have never been recovered. His name is inscribed in the Courts of the Missing at the Honolulu Memorial, National Cemetery of the Pacific, Honolulu.

U.S. Army Corporal Elmer A. Rowe, age 20, was one of three young Lucas Countyan who died in Korea during a very short time span, but his parents were informed of his missing-in-action status before either Dennis W. and Mildred Halferty or Anna Musick learned that their sons also were among the missing

Halferty, only 17, was killed Aug. 6 at Naktong Bridge --- his remains were recovered.

Wayne G. and Ethel Rowe of Chariton were informed prior to Aug. 22, 1950, that Corporal Rowe, Co. F., 2nd Battalion, 7th Cavalry Regiment, 1st Cavalry Division, had been reported missing as of Aug. 12. They were informed later that he had died in combat on that date.

Born in Wayne County, Elmer enlisted in Jasper County, but his home of record was Millerton. His father, employed as a railroad worker, seems to have moved his family fairly often. His parents had received a letter from Elmer dated Aug. 7 telling of preparations for an attack and it may have been during that engagement that Corporal Rowe was captured, then killed.

His remains have yet to be recovered and his name, too, is inscribed in the Courts of the Missing at the Honolulu Memorial, National Cemetery of the Pacific, in Honolulu.

Iowa records on file at Camp Dodge in Johnston identify Roy R. Kirton as a Korean War loss from Lucas County although federal records identify him as a resident of Marion County. U.S. Army Corporal Kirton, age 40, assigned to Service Battery, 39th Field Artillery Battalion, 3rd Infantry Division, was captured in combat near the Kunu-Ri Gauntlet, North Korea, on Nov. 30, 1950. He died in enemy hands more than a year later, on Dec. 1, 1951.

His remains have not been recovered. The Chariton Leader of May 14, 1954, reported that a memorial service for him was to be held at Newbern. His name, too, is inscribed in the Courts of the Missing  at the Honolulu Memorial, National Cemetery of the Pacific, in Honolulu.

Roy's parents, Lee (1875-1952) and Mina Pearl (Shounkwiler) Kirton (1883-1915) are buried in the Newbern Cemetery and they were living in Liberty Township, Lucas County, near Newbern, when Roy was born 29 March 1910. Mina Pearl died during 1915 and Lee raised their three children, Rosa, Roy and Ray, by himself, living much of the time on a farm in Dallas Township, Marion County. He still was a resident of Dallas when his son was reported missing but was dead by the time the death death was confirmed.
Posted by Frank D. Myers at 5:58 AM