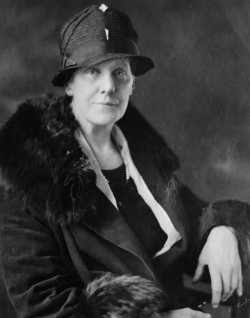 I got to wondering Sunday, while mowing lawn, about the first Mother's Day in Chariton and discovered later in the day that the honor of first observance apparently goes to those Presbyterians, still located at the intersection of East Braden and North Seventh.

Here's the "Presbyterian Church Note" from the front page of The Leader of May 6, 1909: No movement of recent date should receive our more hearty support than that of a Mothers' Day. Our church has begun the movement and adopted the second Sunday in May as Mothers' Day. In many of our churches on next Sunday a sermon for the occasion will be delivered. The day will be observed in our church. The morning service will be in keeping with the occasion. Let us unite in making the day what it is intended to be and in showing our mothers the love we hold for them and giving to them the honor due them. Let it recall us all to the duty of paying unfulfilled vows. The evening service at 8 p.m. Subject, "The New Life."

It may (or may not) be remembered that Mother's Day was first celebrated during 1908 when Anna Jarvis (left) held a memorial for her mother, Ann Reeves Jarvis, at St. Andrew's Methodist Episcopal Church in Grafton, West Virginia. Anna Jarvis had begun working in 1905, the year her mother --- a peace activist and social reformer who had nursed both Union and Confederate casualties of the Civil War --- died, to have Mother's Day recognized nationwide as a U.S. holiday. A mother, she wrote, is "the person who has done more for you than anyone in the world."

She made the proposal during 1908 to the U.S. Congress, which declined to act with something of a sneer: "If we did that, we'd have to proclaim a Mother-in-Law's Day, too." (President Woodrow Wilson proclaimed Mother's Day a national holiday in 1914.)

Anna persevered, however, and it became evident that the people of the United States liked the idea even if Congress didn't. In the Midwest, the fraternal insurance society, Modern Woodmen of America, gave Mother's Day a tremendous boost during 1910.

During that year, Chariton Methodists jumped aboard --- thanks to the Modern Woodmen. Here's a report from The Herald-Patriot of May 5, 1910:

The Modern Woodmen will observe Mether's Day, Sunday, May 8th. Head Consul A.R. Talbot has issued a proclamation naming the date as Modern Woodmen Mother's Day, and all Woodmen are requested to read the call in the May number of the official paper. Special Mother's Day services will be conducted by Rev. A.H. Lathrop at the Methodist episcopal church at 11 a.m. on the 8th. All Woodmen are requested to meet at their hall at 10:30 sharp and march to the church in a body. Flowers will be provided.

The May issue of the Modern Woodman contains an interesting letter from Miss Anna Jarvis, who originated the Mother's Day idea. She gives as its object the honoring of the name of Mother, and the remembrance through some act of kindness, a visit, or a letter. A white flower, preferably a carnation is the badge of the day, and a letter to Mother should not be forgotten. A beautiful tribute to Motherhood, by Head Consul Talbot, is a leading feature of the May Modern Woodman, and should be read by every member.

After that, Mother's Day services on the second Sunday of May became a tradition in most Lucas County churches and the newspapers of subsequent years are peppered with early-May announcements, invitations and reports.

One aspect of Mother's Day as now observed --- its commercialization --- would have Miss Jarvis  (1864-1948) rolling in her grave at West Laurel Hill Cemetery, Bala Cynwyd, Pennsylvania.

She was so opposed to commercialization that after Hallmark Cards and other companies began selling Mother's Day cards, she organized boycotts of the holiday and threatened to sue the companies involved. She protested at a candymakers' convention in Philadelphia during 1923 and, during 1925, was arrested for disturbing the peace at a convention of American War Mothers. They had offended by selling white carnations for Mother's Day in a fund-raising effort.

Back in Chariton, florist John H. Swanson seems to have launched Mother's Day down the slippery slope of rampant commercialization with advertisements in the the local papers. During 1915, he contented himself with advertising carnations, but by 1916 he was (gasp) advertising Mothers Day flowers of all sorts.

So now you know, the Presbyterians were Chariton's Mother's day pioneers, then John H. Swanson went and spoiled it all --- or at least Anna Jarvis might have so alleged. I suspect he was Lutheran.