Putting faces to some ancient names 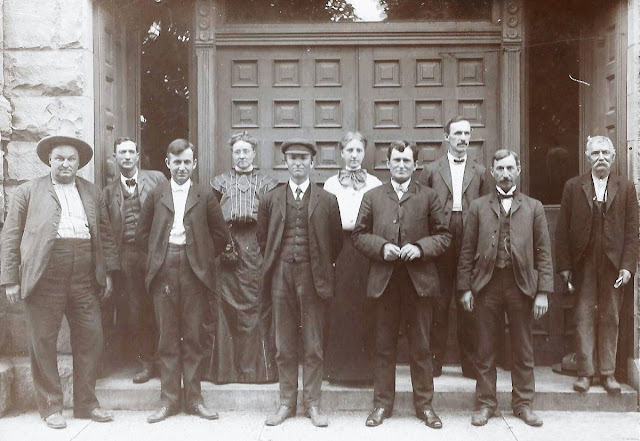 Two of my favorite sheriff names --- worthy of character parts in old-time westerns --- originate in neighboring Wayne and Lucas counties.

One is relatively recent, the late Sheriff Jesse Hook (1914-1996), of Corydon; the other, Lucas County's own Sheriff Laurel Boss (1856-1921), of Chariton. Sheriff Boss had a wife whose name harmonized with his own, Effema Jane.

I don't mean to mock names here. It's just that folks sometimes are scandalized by the names today's young whippersnappers saddle their unfortunate children with when, in fact, there always have been creative parents.

This is a photograph of the Lucas County Courthouse staff taken sometime during early 1905 and there, on the far left, is Sheriff Boss, who served two terms commencing in 1902.

Continuing onward to the right we have Laurel's deputy sheriff, George Jacob "Jake" Gittinger, County Recorder Andrew Jackson "Andy" Holmes, County Superintendent of Schools Laura Fitch, and outgoing Clerk of District Court Emerson Solomon Wells. E.S. had a wife whose name was a match for his own. Her parents christened her Iberi Buzzard.

The photo came to the historical society during 1977 from Charles Johnston Prior (1925-2000), a longtime courthouse worker himself, first in the engineer's office, then in social services. I've always been a little confused about his name. My mother, who knew him well and was native to the same general neighborhood, always called him Johnston --- the middle name that carried forward his mother's old and honorable English Township maiden name. But maybe that was a childhood thing. Everyone else seemed to call him Charles.

Thank you for sharing this! That court clerk, Emerson Solomon Wells, was my great-great-grandfather. I've never seen this photo before.

I've always wondered why my great-great-grandmother was named Iberi, but I still have no clue.