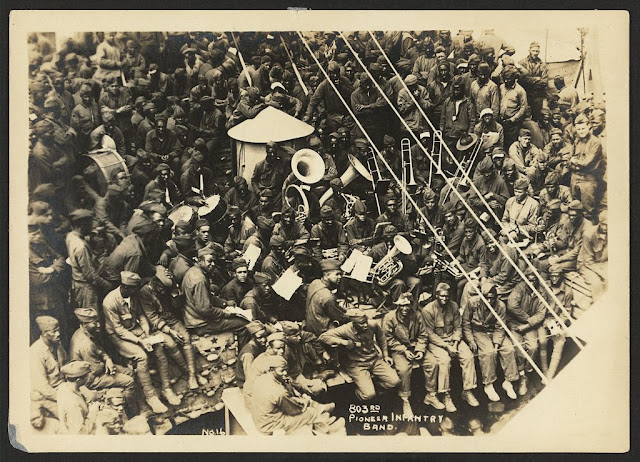 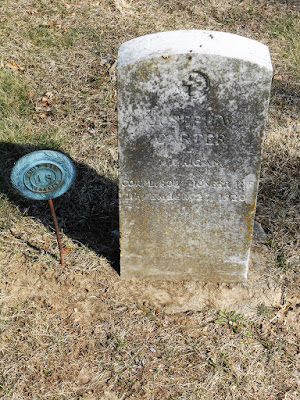 The bigger photo here, from the Library of Congress collection, was taken on July 18, 1919, aboard the troop ship U.S.S. Philippine as she prepared to sail from Brest harbor in France to New York, carrying home to America members of the 803rd Pioneer Infantry Battalion.

Troops surround members of the battalion band and somewhere in that sea of faces may be that of Corporal Wilson Carter, then age 30.

Less than a year and a half later, the remains of this young man would be brought home by train from Detroit to rest on a pretty hilltop in the far northwest corner of the Chariton Cemetery. He had been  killed during late December, 1920, "when (the) revolver in his wife's hands discharged."

This relatively small area of the cemetery contains more sorrowful stories per square foot involving young men who survived war, then died tragically soon after, than any other I've found --- Wilson Carter, Daniel Coffelt and Artie Trisler, all buried within a few feet of each other. This is a little of Wilson's story; perhaps I'll tell the others another time.

Named Joseph Wilson Carter by his parents, Wilson was the eldest of 13 children of Charles W. and Annie (Kirby) Carter, born Feb. 25, 1888, in the old coal mining town of Cleveland in western Lucas County. His grandmother was Eliza Ann Carter, the matriarch of Chariton's black community. Charles and his brothers, along with their mother and sisters, had been brought west from Virginia during 1883 by the White Breast Mining Co. to work in the Cleveland mines. He had met and married Annie there.

By 1900, the mines at Cleveland had closed and the Carters, including Wilson, had moved into Chariton where Charles was working as a carpet cleaner during that year and as a laborer 10 years later. Their home was on West Court Avenue, in the area surrounding the African Methodist Episcopal Church that formed its heart.

After 1905, as a young man, Wilson left Chariton and moved to Detroit, where it was easier to find a meaningful and better-paying job.

It's not clear what young black men who felt called to enlist and serve their country during World War I expected, but what they found were strictly segregated armed forces. Black men were not considered fit combatants, although they were expected to serve in dangerous positions on the front lines anyway.

Wilson enlisted in Detroit and was assigned to the 803rd Pioneer Infantry, organized during July of 1918 at Camp Grant, Illinois. After a month of minimal training, the unit was moved overseas during September and assigned to the First Army, where the men served from October until November, 1918, when Armistice ended the war.

After several months of assisting in clean-up operations, the men of the 803rd boarded the U.S.S. Philippine at Brest during July of 1919, returned to the United States and were demobilized at Camp Grant.

I do not have access to Wilson's service record, but the fact that he had been promoted to corporal suggests that he was man of responsibility who could be trusted.

Nor do I know exactly what role his company played in the war, but veterans  of black units who told their stories later described tasks such as hauling ammunition, digging trenches, cutting barbed-wire entanglements, repairing roads and helping the French clean up devastated towns and villages once combat had ended.

Once the war ended, Wilson returned to Detroit and to his wife, Isabelle (Walker) Carter, whom he had married on Aug. 6, 1916.

The incident that claimed Wilson's life occurred on Dec. 29, 1920, and the following report, from the Herald-Patriot of Jan. 6, 1921, is based upon information provided by John Richmond, who accompanied his friend's remains home to Chariton from Detroit for burial. Well into the 1940s, the editors of Chariton newspapers felt obligated to identify black residents as "colored" when reporting upon their life passages:

Relatives and friends in Chariton were greatly shocked to learn of the tragic death of Mr. Wilson Carter (colored), son of Mrs. Annie Carter, of W. Court Ave., of this city, which occurred at his home in Detroit, Mich., about 2:40 o'clock on Wednesday morning, Dec. 29, 1920. As near as can be ascertained the particulars are as follows:

Mr. Carter and wife and a number of friends had been members of a theatre party the evening previous and after their return home Mr. and Mrs. Carter talked at some length and finally engaged in a scuffle. While they were talking, Mrs. Carter had picked up a revolver from her dresser and while they were scuffling it was accidentally discharged, the bullet striking Mr. Carter near the heart. Medical aid was summoned at once but he expired in about 40 mintues.

Isabelle Carter, according to Richmond, "was prostrated over the terrible affair and was taken to a hospital for treatment, later being removed to a detention hospital to await a hearing on a criminal charge."

I suspect, but cannot prove, that no charges were filed.

Funeral services were held at the Crosby undertaken parlors in Detroit on the Friday after Wilson's death, then the remains were brought to Chariton by train where final rites were held at the Beardsley undertaking establishment on Monday afternoon. Chariton's newly formed American Legion unit provided graveside rites.

Here's Wilson's obituary as it appeared in The Herald-Patriot:

J.W. Carter was born at Cleveland, Lucas county, Iowa, on February 25, 1888, and died Dec. 29, 1920, aged 33 years, 2 months and 4 days. He leaves a father and mother, C.W. and Annie Carter, of this city; two sisters, Edith and Anna, of Kansas City, Mo., and five brothers, Oscar, Roland and Paul of this city, Otis Carter of Columbus, N. Mex., and Harley, of Chicago, all of whom were present at the funeral except Harley. Deceased was married in Detroit, Michigan, on August 6, 1916, to Miss Isabel Walker, of Youngstown, Ohio, who also survives him. He resided in Chariton until about 12 years ago, when he went to Detroit and that place has since been his home. he was a member of Rosewood Lodge, Knights of Pythias, and was past chancellor of the same. He was well liked by all who knew him and his death will be deplored by many friends. To the grief stricken ones the heartfelt sympathy of the community will be extended.

Annie and Charles continued to live on West Court Avenue into the1920s, but at some point, Charles moved to Kansas City to find work and died there on Aug. 20, 1929. He is buried in Kansas City.

During March of 1930, Wilson's widow, Isabelle, applied for a military tombstone to mark her husband's grave in the Chariton Cemetery and had it shipped to his mother and brothers at 1221 West Court Avenue, Chariton, and they arranged to have it placed.

Annie, then nearly 68, died at her West Court Avenue home on Feb. 23, 1938, and was buried near Wilson and other children who died young on the family lot. Wilson's grave, however, is the only one on the lot that is marked.