The Alma Clay Building --- In the Beginning 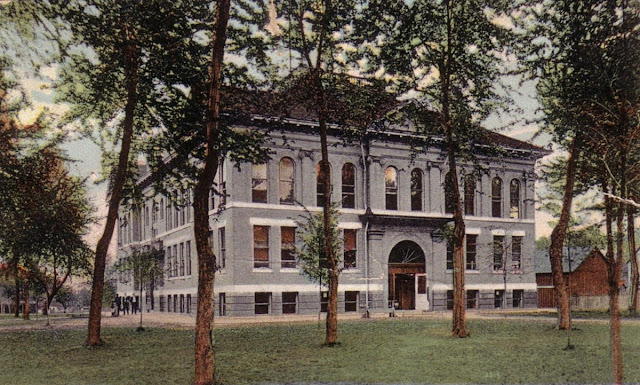 I wrote yesterday about Miss Alma Clay (1872-1928), the beloved elementary-level educator and administrator after whom a grateful community and school board named the 1900 Alma Clay School building just a few days before her death. Previously known as the Bancroft building, it had housed Chariton High School until the current high school building was constructed just to the east during 1923.

But there had been a school since 1877 in the block bounded by North Main and North Grand streets, Osage and Orchard avenues, now filled entirely by the high school, various additions, Johnson Auditorium and the Chariton Community Center.

Until 1877, the lots in the far southwest corner of the block had contained the orchard, garden and barn lot serving the simple frame house and outbuildings that had been home to Smith H., Annie and Jessie Mallory since that family had arrived in town 10 years earlier. Their home, fronting on North Grand, was located where the curve of the entrance drive, sign and giant flag pole now are.

But by 1877, Smith Mallory already had put together his 1,000-acre Brook Farm, stretching north from Chariton city limits, and had in hand plans for the mansion, Ilion (Mallory's Castle), that he would build there 1879-1880. So the family really had no long-term need for what was one of the most convenient locations in town at the time for a new school.

There were approximately 500 scholars enrolled in Chariton's public schools during 1877, nearly all of them housed in the giant brick building constructed during 1868 on the current site of Columbus School. It was bursting at the seams.

So during the summer of 1877, voters approved the sale of bonds to construct a second building and the Mallory orchard lots were purchased as its location. B.F. Roberts of Leon submitted the lowest bid for construction ---  $4,000 --- during August and construction began immediately.

During late October, however, the unthinkable happened. The 1868 building caught fire and was gutted while firefighters and citizens stood helplessly by (after rescuing as many of the contents as possible) and watched it burn. There was no water to fight the fire and no adequate engine to pump water had there been any.

Although work on the new building was under way, brickwork was barely half done.

The school board responded to the crisis by renting every available public space in town, from the Presbyterian church basement to the Mallory opera hall, and moving salvaged equipment, teachers and students in.

Meanwhile, work progressed on the new building. The walls were up by mid-November and roofing was ready to start. What thereafter was known as North School opened its doors early in the new year, 1878, and some of the students moved in. By January of 1879, the new South School had been completed and students moved in there, too.

Although South School was larger, the two new schools looked quite a lot alike. I've found no decent image of the North School, but it was a two-story brick structure, four classrooms to a floor, with a soaring bell tower at it southeast corner topped by a mansard roof.

As the years passed, the need for additional classroom space continued to grow. A building known as East School was constructed in southeast Chariton during 1881 and another, called West School, was built in the northwest part of town during 1890.

During 1892, the school board decided that all of these buildings needed more imaginative names. South School became Columbus; East School, Garfield; West School, Franklin; and North School, Bancroft, named in honor of a now-obscure historian named George Bancroft, much admired by the superintendent of the day.

Time marched on, and Columbus, Garfield and Franklin proved to have been good investments, solidly built and durable.

That was not the case at Bancroft however, where structural issues had become clearly evident by the time it received a new name. By 1899, it had so many structural issues that both parents and school officials were worried about the safety of the scholars who studied there.

During March of 1900, voters approved 232-37 the sale of bonds to finance a new school and the old Bancroft was demolished during June. Additional lots had been purchased north of original school site, so its replacement was pushed north, away from the corner of North Main and Osage, only partially on the footprint of the earlier building.

The architect for the new school was Edward S. Stebbins of Minneapolis, brother-in-law of Frank Crocker, a school board member who is principally remembered now for bankrupting First National Bank during 1907 and dispatching himself with an overdose of morphine in the family's grand home, now Fielding Funeral Home.

The construction contract was awarded to Enslow, Johnson & Best of Chariton, who had submitted the low bid of $26,084. The plumbing and heating contract went to the Pond & Hasey Co. of Minneapolis after a low bid of $3,633.

The new school was ready to welcome students on Feb. 18, 1901, and on Feb. 21, The Chariton Democrat carried the following description of the building that now was Lucas County's educational pride and joy:

Chariton's magnificent new high school building has been completed and on Monday morning school opened there promptly on time. The new  building is thoroughly modern in appearance and appliances and is one of the handsomest and best buildings in this section of the state.

It is built on the site of the Old Bancroft building on North Main Street, which was condemned and torn down. The new building has been erected at a cost of about $35,500. It is 125x65 feet, two stories high, with a basement that may be used for school purposes. It is built of pressed brick and stone and contains twelve rooms.

The basement is now fitted up for a gymansium. The first floor contains six rooms; on the second landing is the superintendent's office; on the second floor is the assembly room, music room, two recitation rooms, two stage or dressing rooms, and a teachers' rest room. There are large hallways and cloakrooms throughout the building.

Mr. E. Stebbins of Minneapolis is the architect and as soon as he accepts the building it probably will be formally dedicated with appropriate ceremonies. The contractors were Johnson & Best and Stewart & Enslow of this city and the substantial building speaks volumes for their skilled workmanship.

Although officially still the Bancroft Building, few in Chariton probably thought of the district's newest and most impressive building as anything other than "the high school" during next 23 years.

But in 1923, a new state-of-the-art Chariton High School was built immediately to the east on lots that had been purchased and cleared of residential properties and elementary students were moved into the older building.

Three years later, during 1926, Alma Clay, a 33-year veteran teacher and administrator in the district, was stricken by cancer. Surgery brought temporary relief and she was able to teach and administer during 1926 and 1927.

But it became clear during 1928 that the cancer had returned and would prove fatal. As a result, the decision was made to discard the name "Bancroft" and rename the school building Alma Clay in her honor. The school board made the honor official during early September of 1928 so that when she died on the 26th of that month she was aware that the honor had been accorded.

And Alma Clay it remained until 1970 when the grand old building --- which had housed 300 junior high students during 1969-70 --- was condemned by the state fire marshal, who ordered it closed. It was demolished during the summer of that year. But that's a story for another day.