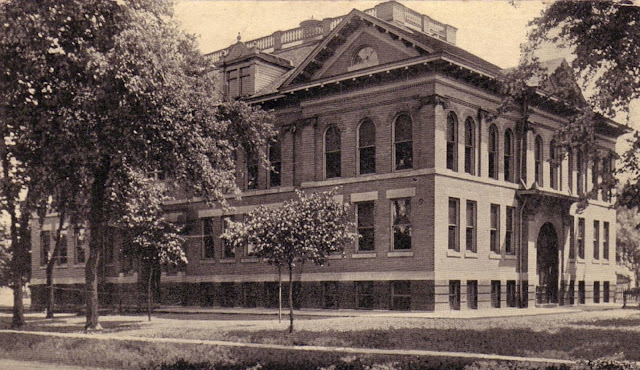 Structural engineer W.H. Hartupee, of Des Moines, had both good and bad news for the Chariton School Board during August of 1939, when he submitted his final report on the conditions of the district's older buildings.

Going into the evaluation process, the board knew that Garfield School --- in southeast Chariton --- was in poor condition and that an extensive rebuild would be necessary there soon. The high school was not a concern. It had been constructed "fireproof" --- just like the Hotel Charitone --- during 1923 of brick, tile, steel and steel-reinforced concrete. The only worry there was size --- student population was increasing rapidly.

The good news involved Columbus and Franklin. Although by now virtual antiques, both of those older buildings were very sound structurally --- hardly deteriorated at all. The major repair needed, Hartupee reported, was at Columbus where a crack in the west facade needed to be stabilized and filled.

Alma Clay, however, was another matter, according to Hartupee. There, the vast wood-framed roof structure was beginning to spread, forcing the wood plate on which it rested to move slightly and applying downward and outward pressure on the building's exterior brick walls. The damage was not severe and Hartupee recommended that damaged portions of the roof structure be replaced and/or reinforced and that a more effective way be found to tie the roof structure together.

Foundation issues were the major concern. The foundations of the building had begun to subside unevenly on the south, west and north fronts as well as at the building's northeast corner and there were indications of less advanced subsidence on the east front. These issues had been noted earlier and tie rods inserted to hold the brick walls together.

The cause, the engineer concluded, was a combination of factors --- inadequate footings for the exterior walls and the fact that cast iron drain pipes from the roof directed water into the ground around the building but not far enough away from it. Inefficient drainage had caused the ground around the base of the school building to become super-saturated, he said, aggravating the subsidence issue.

Hartupee noted that in general Alma Clay was a fine building, but warned that "failure to correct existing structural defects will result in an unsafe building in the near future and lead eventually to abandonment." He encouraged the board to repair the roof, correct the drainage issue, then dig below footing level where subsidence was evident, use hydraulic jacks to raise the walls and build more substantial footings under them.

During 1940, the school board won bonding approval from district voters that authorized it to expend more than $40,000 on building repairs.

The bulk of this was spent at Garfield, built originally during 1881 but with a 1916 two-story four-classroom addition to the east that along with a new entrance masked the original building behind it. During 1940, virtually all that remained of the 1881 building was demolished and three new classrooms, subsidiary rooms and a "community room," or gymnasium, was constructed west of the 1916 addition.

At Alma Clay, drainage issues were resolved and the roof was repaired and reinforced, but other engineers advised another solution to the subsidence issue. Instead of repairing the foundations, a framework of steel posts and crossbeams was inserted into the structure to provide support and to lift the roof load off the exterior walls of the building.

By 1949, however, it became clear that issues had not been resolved as the old building continued to settle, creak and groan. As a result, a Chicago engineering firm was hired to use the latest technology and pump liquified concrete underneath the building.

Although the building now was pronounced structurally safe, difficulties continued to plague it now and then. There was considerable consternation during 1955, for example, when a tie rod snapped during school hours, setting off a weekend of rumors in Chariton that Alma Clay was on the verge of collapse. That turned out not to be the case, however.

Going into the 1960s, Chariton's older buildings came under increasing scrutiny from the state fire marshal, especially Alma Clay, filled from top to bottom with some 300 junior high school students. Both Columbus and Franklin were replaced during the early 1960s by the current Columbus and Van Allen schools, alleviating problems there. But Alma Clay continued in use.

Although the exterior masonry walls continued to give the building the appearance of great stability, the interior contained vast amounts of wood, now very dry after some 60 years; and the roof, although now topped by asphalt shingles, was entirely constructed of wood. In addition, the Alma Clay auditorium, used for all-school and other gatherings, was on the top floor.

The fire marshal became increasingly concerned that in case of fire it would not be possible to evacuate all of the students and staff safely.

Various measures were imposed. Smoke "sniffers" --- we call them smoke alarms now --- were ordered throughout the building and large gatherings in the auditorium were forbidden.

Finally, the fire marshal told the school board that a building-wide sprinkler system had to be installed in order for a use permit to be issued and that once the sprinkler system was in place, the district still would have to demonstrate that comprehensive planning was in progress to alleviate all of the old building's difficulties, structural and otherwise.

All of this came to a head during 1969, when a major building plan was placed before voters in the district. The $1.2-million project called for demolition of Alma Clay and construction on its site of a new junior high building, major additions to the high school building, already enlarged during 1951; and addition of an olympic-sized swimming pool to serve both the school and the community.

Although the proposal won a narrow majority during June of 1969, 917 votes to 905, a 60 percent majority was necessary and the bond issue failed.

Various factors were involved. By now, following consolidation, the district had attendance centers in both Lucas and Williamson where some voters, especially those who were not parents of students, were less inclined to support major construction in Chariton. The swimming pool seemed a bit much for many in conservative Lucas County. And there had been a small, but vocal, group who claimed that warnings about Alma Clay's condition were just "scare" tactics.

In would be 1983 before ground was broken for the Johnson Auditorium and Chariton Community Center, financed in large part through benevolence, on the old Alma Clay site; and more years still before voters would approve construction of the current junior high in north Chariton.