Just don't plan on sticking around .... 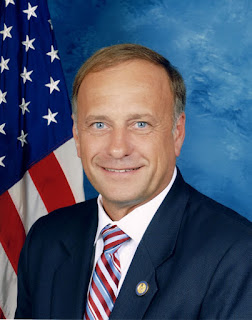 My early-morning reading included a story in this morning's Des Moines Register headlined "People say they're canceling their Iowa vacations because of Steve King's words."

King (left), who represents northwest Iowa's 4th District in the U.S. House of Representatives, is widely known for saying bluntly what, I'm afraid, many Iowans (in his own district and elsewhere) think. In the latest instance, he expressed his support for Geert Wilders, a white supremicist far-right Dutch politician, adding "we can't restore our civilization with someone else's babies."

"Our" babies, in this instance, would of course be white and Christian. It's classic neo-fascist fare. David Duke, former imperial wizard of the Ku Klux Klan, was delighted.

Iowa tourism types have been working since to reassure those who might be considering a recreational visit to the state, including participation in RAGBRAI.

Shawna Lode, manager of the Iowa Tourism Office, said staff members have been assuring potential tourists, particularly minorities, that Iowans were welcoming of all, according to The Register. "We’ll continue to say that Iowa is a welcoming place and we welcome all people."

"State officials this week offered many responses like this one on the Travel Iowa Twitter account: 'Iowans are diverse, progressive and tolerant. We welcome all people to experience our state,' " The Register story continued.

Well, that's certainly true of many Iowans --- but probably not the majority. Iowans are not especially diverse, we've lost our progressive edge as the population has aged and bright young things have moved away. Nor are many of us especially tolerant.

That doesn't mean that tourists of all varieties, with an adequate supply of cash, would not be tolerated. It's unlikely that people of color, varying sexual orientations or non-Christian (or no) religious traditions would face violence --- so long as they didn't "flaunt."

But I think it is safer to say, "welcome to Iowa," only so long as the caveat, "just don't plan on sticking around," is added.