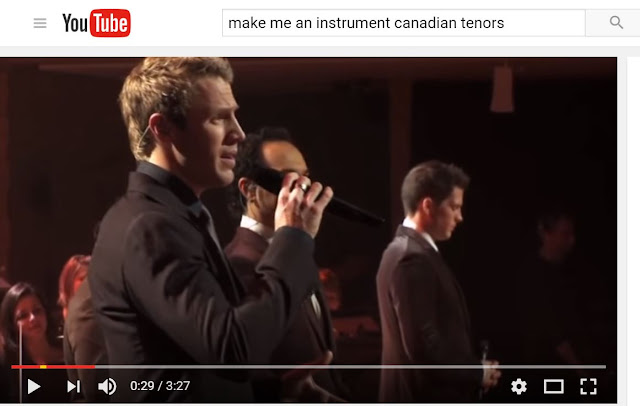 One of the oddities of life among Christians, a religion based loosely upon the life and teachings of a guy sometimes called the Prince of Peace --- especially at Christmas --- is that, as a group, we're remarkably peace challenged.

So I've been thinking that some Sunday morning --- when I'm familiar enough with The Hymnal 1982 arrangement to ensure that fingers and voice are working together (a challenge for a lazy and incompetent organist) --- we should sing No. 593 which begins, "Lord make us servants of your peace."

It's a paraphrase of a prayer attributed to St. Francis (Page 833, Book of Common Prayer) --- a lovely piece of noble sentiment that, of course, was not written by St. Francis at all.

There are many paraphrases of that prayer, set to music, and I listened to several on YouTube upon returning home Saturday afternoon after folding lectionary sheets and practicing a little.

This arrangement and performance by The Tenors, a Canadian ensemble, was my favorite --- although I did notice some carping in comments here and there the version wasn't explicitly religious enough.

Looking farther, I discovered that peace does not always prevail even among The Tenors. Ensemble member Remigio Pereira managed to get himself fired during July after going rogue during a perforance of O Canada, the national anthem, and slipping the line "all lives matter" into a solo verse.

Many were outraged that he had played fast and loose with the national anthem; others took offense because "all lives matter" has been a line used often by those less than supportive of the "black lives matter" movement. Goodbye, Remigio.

None of this changes the sentiment of the song, however, appropriate for a Sunday or any other morning.


Just in case you'd like to compare, here's the Book of Common Prayer version: