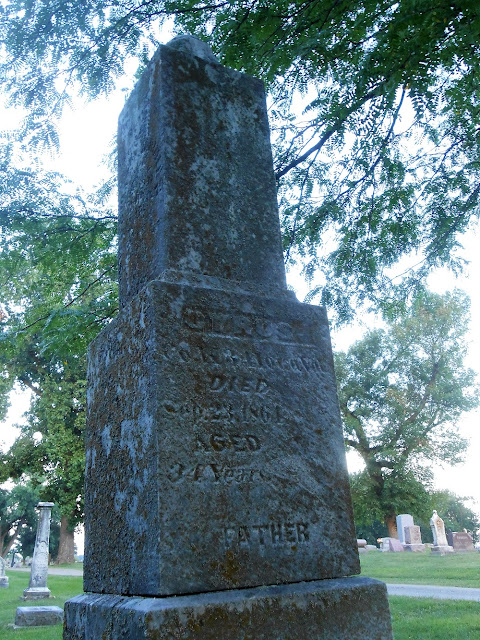 I've been plugging away a little in spare moments this week on the roster of Lucas County's Civil War dead, a project I've actually been plugging away at since 2011 --- and have embarrassingly little to show for the effort. But there are all those diversions ....

And it does take time --- what started as a list of names became more complicated after I decided it would be nice to add brief biographies. Currently, there are 140 names on the list; I'm guessing that there will be in the neighborhood of 150 when all is said and done. And even then, I'll have missed a few.

That's a fairly stunning number --- the most Lucas Countyans to die in any armed conflict. But then the conflict between Union and Confederate forces was the most deadly of U.S. wars. An estimated 620,000 men died. In 1860, just before the war began, Lucas County's population was 5,766. No family living here then was unaffected.

Cenotaphs, a Greek term that translates as "empty tomb," commemorating some of these men are scattered in cemeteries across the county. Sometimes memorials are inscribed on family monuments; in other instances, they stand alone.

And these monuments and memorials sometimes confuse people into thinking that the remains of those who died far from home in combat or of disease during the war were returned to their families --- they weren't.

But many of these remains could not be identified --- they rest among "unknowns" --- and a substantial number of remains simply were lost.

Cenotaphs gave grieving families a degree of comfort I'm sure, and the assurance that their loved one would not be forgotten entirely. In some instances there even are small headstones inscribed "Father" or "Son" or with a given name and a Grand Army of the Republic flag-holder near it to mark the precise site of an empty grave.

Cyrus Larimer, a young man of 31 with a wife, Christiana, and five young children --- three of his own plus a nephew and niece --- to support, died of enteritis at a field hospital near Morganza, Louisiana, on Sept. 23, 1864.

Christiana raised her family alone after that and died at age 58 on May 26, 1884. It most likely was at that time that the current family stone that contains her commemorative inscription and also serves as a cenotaph for Cyrus was erected. Nearby are side-by-side headstones, one inscribed "Father" and the other, "Mother," even though Cyrus's remains were not among those identified after the war and most likely are buried under a marker inscribed "unknown" somewhere in Louisiana.

And if you attend services at First United Methodist Church, look some morning at the big window in the south wall of the sanctuary. The panel on the far right, you'll notice, is dedicated to the memory of "Cyrus and Christina Larimer."

Here's the biographical sketch for Cyrus:

Cyrus, among the younger children of Hugh Larimer Sr. and his second wife, Nancy McDowell, was born 10 November 1833 in Westmoreland County, Pennsylvania, and removed to the vicinity of Chariton during 1851 with his parents and siblings. On 8 December 1853 he married in Chariton Christiana (Barkley) Larimer, widow of his elder brother, William McDowell Larimer, who had died in Noble County, Indiana, on 14 October 1853. Thus, he became stepfather to a niece, Mary E., and a nephew, William George W. Larimer, only a few months old. Cyrus and Christiana had four children of their own, Annetta, born 1 September 1856; Emma, born 26 April 1858; Clara, born 1860 and died young; and Harry, born 23 May 1862. When the 1860 federal census was taken, Cyrus was working as a clerk in a Chariton store.

Records in the pension file of his widow state that Cyrus enlisted variously on 25 December or 30 December 1863 at Chariton as a private in Co. K, 34th Iowa Volunteer Infantry, and was mustered on 30 December in Des Moines. He reportedly became ill, a condition attributed to excessive esposure and exhaustion, during the siege of Fort Morgan, Alabama, during August of 1864 and traveled with his unit on 18 September to Morganza, where he was hospitalized, and died a few days later on 23 September. His remains most likely were buried nearby, but if and when recovered could not be identified.