The best little whorehouse in Russell 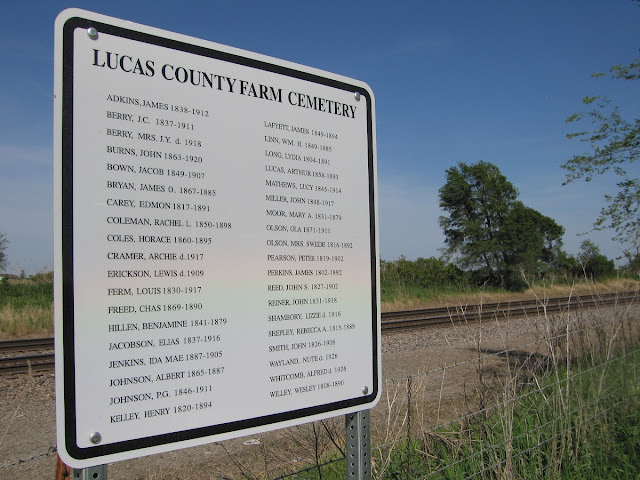 If I were an artist, to illustrate this piece I'd have sketched Newt Wayland, two companions and three unidentified ladies of the evening, flushed from a Russell establishment called Blue Front, fleeing into the nearby corn fields back in 1886.

But I'm not, so I settled for this photo from the County Home Cemetery, where the old rapscallion  finally came to rest during 1926 in an unmarked grave. He was 93 at the time, suffering from senility and when he died there was no one to claim the body --- or to write an obituary.

You'll find his name on the cemetery sign, erected some years ago by the Chariton Historic Preservation Commission and Lucas County Genealogical Society, near the end of the alpabetical sequence --- with "Newt" spelled "Nute," which is how I believe it appeared in county home records.

Newt's claim to somewhat dubious fame, as proprietor of  the Blue Front, had occurred 40 years earlier and was duly noted as follows on the front page of The Chariton Democrat of July 9, 1886, under headlines that read, "A Large Day at Russell: Which Rids the Town for the Time Being of Six Bad Ones."

"Last Saturday was a large day at our neighboring town of Russell. For a year or more one Newt Wayland, a widower, has entertained people at his bachelor quarters, near the stock yards in that village, which were not welcome guests to the people living on adjacent lots and much feeling has existed against the 'ranch.' But not until last Saturday morning did the citizens of that town make an open demonstration of their disapproval.

"About daylight a woman who had got off from a night train was seen to go from the depot to the Blue Front, as the abode of Wayland was called, and steps were immediately taken to issue a warrant for their arrest. About 8 o'clock the constable and a deputy went to make the arrest, followed by a large number of citizens, who climbed on the stock yard fence and freight cars to see the courageous constable do his work.

"The constable did not expect to find more than two, in fact only had a warrant for two, and when six persons came tumbling out of the shanty in more or less scanty attire he was badly rattled, and the men did about as they wanted to, wrestling the women from his iron grasp and running them into the adjacent corn fields and meadows. It is said this scene of rescuing the women was quite an exciting one and called forth loud cheers for the constable.

"Two of the men, Geo. and Emory Stevens (Wayland being too drunk to help) would grab a woman from the constable and, both getting behind her, compel her to make exceedingly rapid strides to a place of safety, and then return for another, who was helped out of the way of the valiant constable in the same manner, until all were at liberty, and then the Stevens boys strolled off with them to commune with nature and pick blackberries, returning after awhile to get the women's shoes and other articles of clothing which had been left behind in the hasty retreat.

"The constable and deputy, when the rest had disappeared in the distance, marched Wayland triumphantly through the streets and put him in a place of safe keeping. Warrants were issued for the arrest of the fleeing offenders, but the constable did not seem in any hurry to add to the glory of the experience he already had, and J.H. Cook, who goes on crutches, was deputized to take up the trail and bring them in.

"With the aid of some of the citizens and their wagons they were soon all captured but one of the women, who had been in that neighborhood before and knew the roads too well to be caught easily. They were found about two miles from town very tired and thirsty. They were taken to 'Tammany Hall,' where their trial dragged lazily along till noon, when the justice and Mr. Cook, the deputy constable, wanted to go to dinner and left the prisoners in charge of the valiant constable.

"They were hardly out of sight when Geo. Stevens turned a back somersault out of the window and went up the road at a gait that would put to shame many of the fast horses of the day. The constable rushed boldly out into the street with a cocked revolver in his hand and fearlessly yelled, "George, come back!"

"The cloud of dust was so dense behind George that he could not hear and did not come back. He went and found his female friend who had not been captured and they two started for Chariton across lots.

"When Mr. Cook returned he pronounced the constable unfit to be called an American citizen. The women were set free with an injunction from the Court to go and sin in Russell no more. Wayland and Stevens were held on $300 bonds, which they could not give and were brought to Chariton to await trial, and Russell is at peace again, and will re-elect the constable."

Justice in Lucas County during the 19th century seems to have proceeded at varying rates. As some may remember, the unfortunate Hiram Wilson was dealt with by a lynch mob back in 1870 on the evening of the day he gunned down Sheriff Gaylord Lyman.

But Newt, George --- eventually recaptured --- and Emory cooled their heels in the Lucas County Jail for more than three months before a Lucas County Grand Jury got around to their case during early November. And then the jury declined to indict and the three were released.

Newt, whose full name was Isaac Newton Wayland, was a son of Joseph and Patsy (Threlkeld) Wayland and had been brought by his widowed mother to Lucas County, where many members of her extended family settled, during the 1850s.

Although something of a rascal, he was a long-lived one, surviving until May 23, 1926, when he died at the county home at the age of 93. Nothing else that he did during that long life, however, generated quite as much publicity as the Blue Front affair.

Frank,
Great newspaper story about the 'den of evil' as well as a view into the workings of the officer of the law back in those days. Also glad to see the sign with names and dates which was erected at the cemetery. Just wondering if any of the burial plots are marked ?? Crawford county had a "professional witcher" locate the bodies in our county cemetery several years ago.
Looks like Newt was one of the last ones buried in that location.
norm

Only four of the graves are marked. Apparently the county decided to provide small tombstones in 1914, continued the practice until 1920 and then stopped. After the 1920s, most of those who died at the county farm were buried in the Potters Field section of the Chariton Cemetery.

Thank you for the morning chuckle, Frank. I couldn't help but picture the Keystone Cops as I read of the ladies of ill repute running through the corn with the townspeople in hot pursuit! Great article.