My dad, Darrin & the way things are 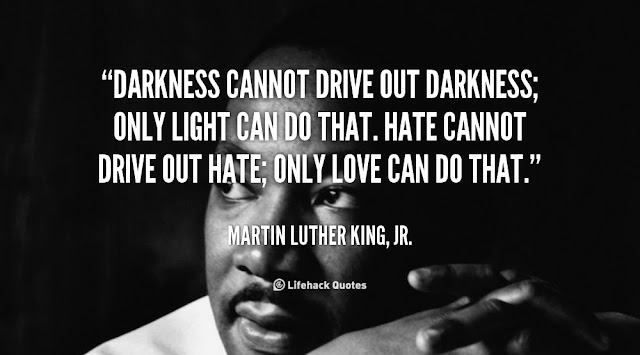 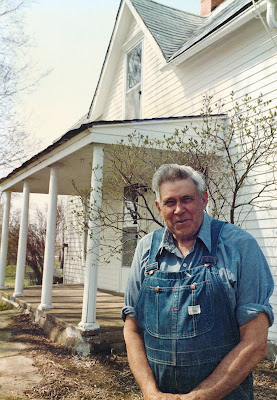 The neighbor and I were talking about my dad (left) earlier this week, so he's kind of been on my mind during the past few days. Darrin and Dad spent lots of time together during the latter's final years when he was alone here during the week and pushing 90.

They'd generally visit a couple of times a day and quite often pile into one of the trucks, sometimes with Kelsey or Madelyn in tow, and roam the back roads --- or go fishing. Dad watched, Darrin fished.

"I'd sometimes say I'd never seen things this bad" after one disaster or another, recalled Darrin --- then in his 30s. "Aw, Darrin ---  it's always been bad," was Dad's response. He was a realist and had seen a lot.

Now I'm getting older --- and it's reached the point where I've seen a lot, too.

There's no denying that this has been a tragic week --- and month: the shooting deaths of Alton Sterling in Baton Rouge, Philando Castile in Falcon Heights, Minnesota, then five police officers in Dallas. All on top of the massacre of 49 people, mostly gay, at an Orlando club during early June.

On the other hand, here's a short list of news that generated headlines during my high school senior years, 1963 and 1964:

June 12: Medgar Evers, field director for the NAACP in Mississippi, was fatally shot in the driveway of his Jackson home by Byron De La Beckwith, a member of the White Citizens' Council. Taken to a Jackson hospital, Evers was denied treatment initially because he was black. Eventually, he was allowed to die there. De La Beckwith was not convicted of murder until 1994.

August 28: 250,000 demonstrators participated in the March on Washington for Jobs and Freedom. Dr. Martin Luther King Jr. delivers his "I Have a Dream" speech.

September 15: Four Ku Klux Klansmen set off sticks of dynamite planted under the front steps of the black 16th Street Baptist Church in Birmingham, Alabama, killing four young girls and injuring 22. Although the FBI had identified the bombers by 1965, no one was prosecuted until 1977.

June 21, 1964: Three civil rights activists, Michael Schwerner, Andrew Goodman and James Chaney, one black and two white, were murdered by law enforcement officials and Ku Klux Klansmen near Philadelphia, Mississippi, and their bodies concealed. Mississippi Gov. Paul Johnson, who earlier had described NAACP as standing for "Niggers, alligators, apes, coons and possums," suggested that the three might have gone to Cuba. Their bodies were discovered buried in an earthen dam 44 days later. Eighteen men were indicted, but the state declined to prosecute.

In the aftermath of Kennedy's assassination, President Lyndon Johnson was able to push the Civil Rights Act through Congress --- It was approved by the House on Feb. 10, 1964; by the Senate, on June 19. Barry Goldwater, who had voted against the Civil Rights Act in the Senate, became the Republican presidential candidate. Johnson defeated him with 61 percent of the popular vote on Nov. 3 after a highly divisive campaign.

In the international background, unrest was accelerating in Vietnam --- where I would spend a formative year a little farther down the road --- and on Aug. 7, 1964, Congress passed the Gulf of Tonkin Resolution that, in effect, gave President Johnson the authority to launch a war without declaring one.

We were years away from the day when a movement toward respect and rights for LGBT people  like myself would begin. I was fairly well convinced that if anyone found out I'd most likely just have to kill myself.


None of this means that things haven't changed.

Communication now is instant --- so we know about the latest horror almost immediately and, thanks to the social media, more than we sometimes care to about how our friends are reacting.

It's easier to kill more efficiently and in larger numbers as high-tech weapons flood the market and remain easily available.

The field of targets for hate among United States of Americans who thrive on it has expanded lately from black and gay to include brown people and Muslims.

Or that there isn't hope.

The answer hasn't changed, however. As Dr. King so eloquently put it: “Darkness cannot drive out darkness: only light can do that. Hate cannot drive out hate: only love can do that.” (Martin Luther King Jr., A Testament of Hope: The Essential Writings and Speeches)
Posted by Frank D. Myers at 6:59 AM