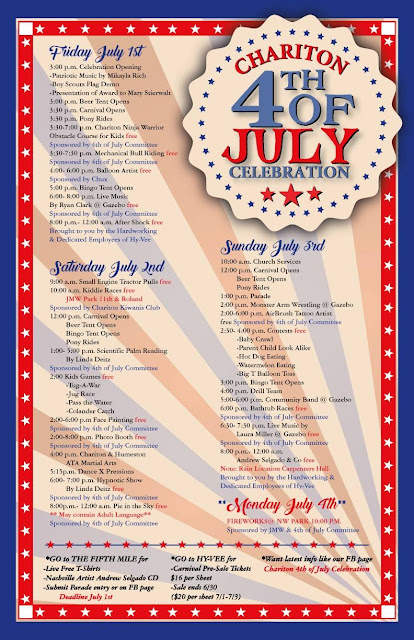 Celebrating the 4th of July in a grand manner is an old tradition in Chariton, so old in fact that records of the earliest observances vanished with the earliest editions of Chariton newspapers (surviving issues begin with 1867).

This year is no exception, so here's the poster. Official opening is at 3 p.m. today (although the inner circle of the square has been occupied by the carnival and other attractions since yesterday). Note that the parade begins at 1 p.m. Sunday and the fireworks at 10 p.m. Monday.

That schedule was necessary because the square has to be back to its usual configuration first thing on Tuesday and carnival tear-town after its three-day run and local clean-up require a full day.

I thought initially that I'd go back a century, to July 4, 1916, to see what was going on. But I discovered that this had been one of those rare years when nothing in particular was. So I backed up another 10 years, to July 4, 1906 --- and here's a report of the celebration that year from The Patriot of July 5:

"The Fourth of July celebration in Chariton brought to town a crowd of people from the surrounding country that was, in the opinion of many, the largest ever gathered on our streets.

"The day dawned bright and clear and the buggies and carriages began to arrive early in the morning. the livery barns and feed yards were taxed beyond their capacity to accommodate the large number of horses.

"The fire department had complete control of the big event and the members detailed to superintend carrying out of the program kept things moving lively. And they maintained the best of order throughout the day. The fire runs proved to be the same features of interest that they did last Fourth.

"One of the big attractions was the act of Prof. Lamonte, who made daring slides down a cable stretched from the court house tower to the city hall while hanging by his teeth.

"the prizes for the best "floats" in the parade were awarded as follows: First, to the Fair Store; second to L. Reibel, and third to J.C. Flatt.

"Those who heard the orator of the day, H.E. VanHorn of Osceola, were given a treat indeed. His oration was prounounced, by the few hundred people who were able to hear him, as being exceptionally fine.

"Both of the ball games between Chariton and Albia were won by the local team. The score in the morning game was Chariton 5, Albia 2; and in the afternoon, Chariton 9, Albia 4."

I went back another year, to The Patriot of July 6, 1905, in order to figure out how the "fire runs" worked. Here's the description of the event published then:

"The fire-run was a contest between the engine and hook-and-ladder companies, in which the two companies were to race from the fire station, and around the square to the Hollinger & Larimer block (on the northwest corner; now Chariton Vision Center), the engine company to halt the engine at the cistern on the northeast corner of the square, lay hose, attach a nozzle and throw water on the building before the 'hooks,' starting at the same time, could reach the building, raise a ladder and have a man at the top.

"The contest was most exciting. At the alarm by the fire bell the teams pulling the engine (Old Betsy), hose wagon, and ladder wagon started on a dead run from the fire station and the crowd saw a splendid exhibition of quick work by the best volunteer fire company in southern Iowa, for the run of four blocks, the stopping of the engine at the cistern, dropping the suction hose, and getting water to the nozzle was made in just 1 minute, 32.2-5 seconds. However the "hooks" won the race, succeeding in making the run, raising the ladder and putting their man on the building a few brief seconds before water reached the nozzle. A like exhibition was given in the afternoon." 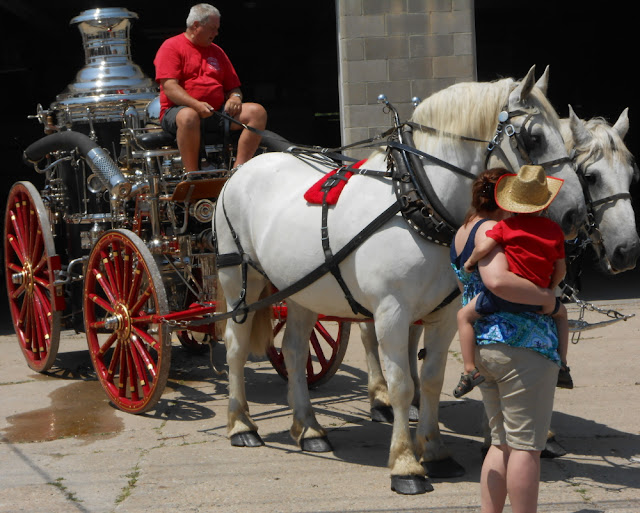 Old Betsy has been featured on the 4th of July in Chariton since 1888.

I'm sorry that I missed the fire-run; the oration, not so much (remember that there were no sound systems in those days). The orator apparently was the Rev. Hezzie Eastman Van Horn, a noted Disciples of Christ preacher in his day who moved shortly thereafter from Osceola to Capitol Hill Church of Christ in Des Moines.

If the square is not going to work, use the fair grounds, or North Park, or out by the BP station?

May its time to think outside the box---did you see the quality of the kiddie rides?