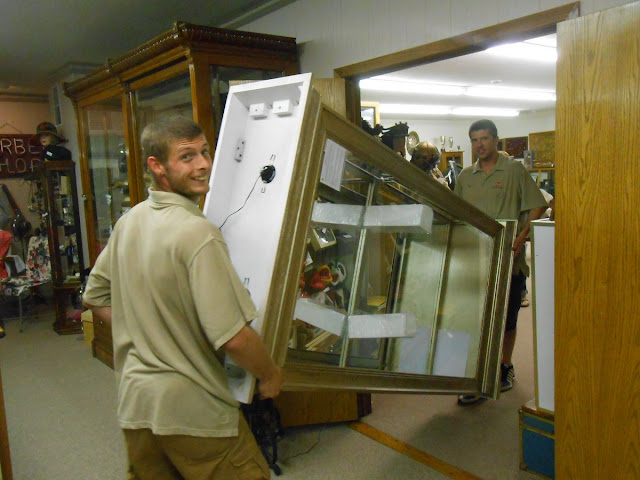 These were our heroes on Tuesday at the museum --- delivery guys from Homemakers Furniture, Des Moines, who with little apparent effort --- or so it appeared --- hoisted four big display cases out of the back of their truck, up the steps, through the doors and finally into the Lewis Gallery. 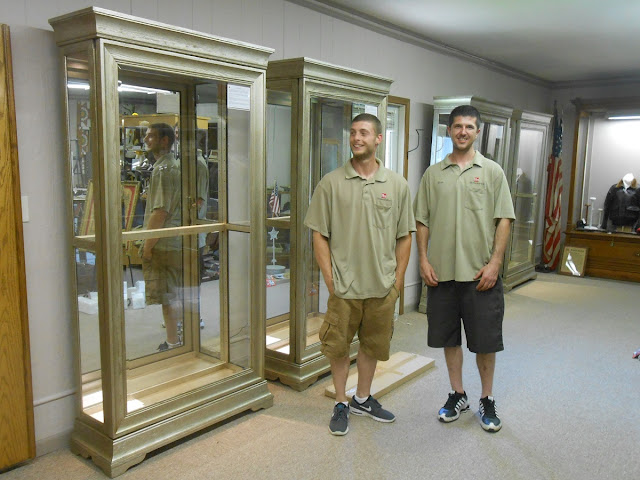 We ordered the cases several weeks ago to house smaller items from the military collection and their delivery means we can wrap up phase one of improvements to the military display, the Lewis Gallery (which houses it) and the library that were begun during January --- funded by a major grant from the Vredenburg Foundation. Phase two hopefully will involve replacing the antiquated lighting system in those two rooms.

During the months that followed, the two big rooms were emptied of all but the largest display cases, walls were painted, crown molding/picture rail installed and new carpet put down. Then, gradually, everything was moved back in --- in a new configuration. All volunteer efforts.

Once the military collection has been redeployed --- and this will take time --- rehanging dozens of wall-mounted items in both library and gallery will be the final step.

The new cases represent a shift in strategy after the project had begun. Originally, we planned to order the cases from our usual vendor of museum supplies and equipment. That company decided, however, to eliminate its discount to museum association members on big-ticket items after an initial order had been filled.

Combined with extremely high delivery costs, we decided that move had priced their offerings out of our range and went shopping closer to home. So far, we're delighted with the result. And the delivery charge? Forty dollars for all four cases --- compared to delivery charges of approximately $1,000 for the same number of cases ordered from the original supplier.

The museum now is open from 1 to 4 p.m. daily Tuesday through Saturday and we'll be holding an open house a little later this month (watch for details). Feel free to stop in and take a look (keeping in mind that all of this remains a work in progress).