Warren Callahan --- behind the wheel 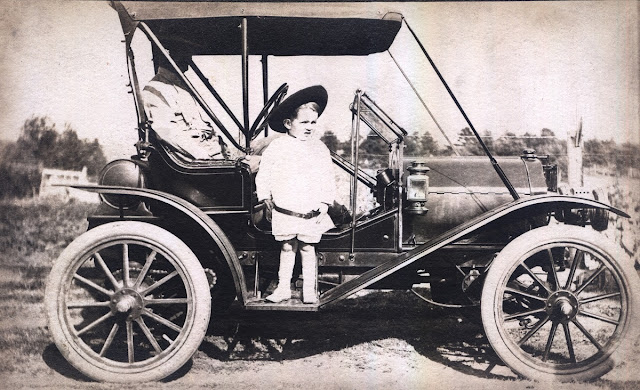 This postcard view, dated September 1911, turned up Sunday afternoon when I was moving stuff from one place to another at the museum and caught my attention (a) because of the vintage automobile and (b) because, hey, I know Warren Callahan, identified as the driver (and probably, the owner).

You don't really see much of Callahan in the photo because his face was shaded by the vehicle's cloth top. The child standing on the running board is identified as Richard Anderson.

Automobiles had been running around in Chariton since August of 1902, when Harry O. Penick brought the first --- a Locomobile --- to town. For more about that, see "Locomobile, not yet broke to ride, bucks off driver." But the Callahan-mobile certainly would have been among the earlier horseless carriages in town.

Warren, whose given name actually was Charles Warren, was an Ohio native who came to Iowa as a teenager about 1857 and settled in what became the Oakley neighborhood. After Civil War service with the 1st Iowa Volunteer Cavalry, he married Loretta Marsh and they had seven children prior to her death during 1888. He married Malinda (Carpenter) Fountain, widow of Moses, during 1902 --- three years after moving into Chariton from his farm. He died 20 years later, on Jan 14, 1933, age 89.

Richard Anderson, the boy on the running board, was the only grandchild of Warren's second wife, Malinda (Carpenter) Fountain/Callahan.

Several of Warren's descendants honored him by naming their children Warren, too. Among them was Warren Miller, son of Warren Callahan's grandaughter, Fern (Griffis) Miller and her husband, Jeremiah (my great-aunt and uncle); and Russell's Warren Blue, son of Callahan's daughter, Avis (Callahan) Blue.
Posted by Frank D. Myers at 6:31 AM