Second-coming type and the costs of war 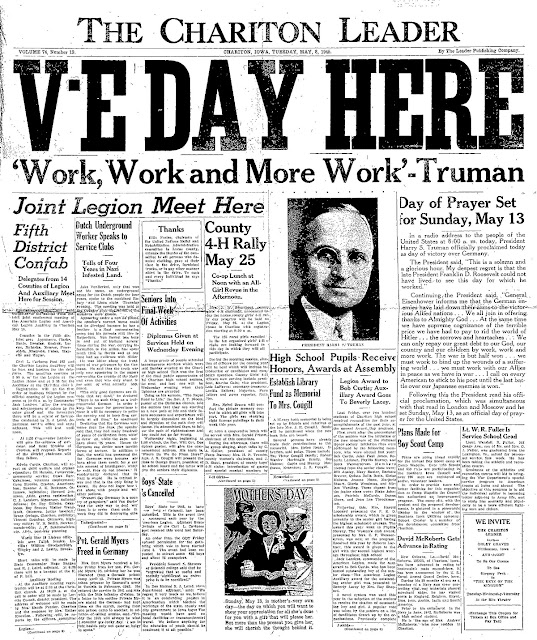 Back in the day, we called this "second-coming type" and it rarely was used to scream absurdities, as it tends to be in today's media. Instead, its appearance on the front page of a newspaper, in this case The Chariton Leader of Tuesday, May 8, 1945, marked occasions of great importance, in this instance the official surrender of Germany, Victory in Europe, or V-E Day, announced by President Truman at 8 a.m. that day.

Tuesday was The Leader's regular publication day, as it is still is, so the staff must have scrambled to tear up the front page form that had been prepared for the press, then insert this giant headline and a brief story about the Truman announcement. There would have been time to do little more.

And most likely, the staff was prepared. Everyone knew the announcement was coming; it was just a matter of timing.

The announcement was met with subdued gratitude in Chariton and elsewhere across the United States because war continued to rage in the Pacific and would do so until Aug. 15 when Japan's surrender was announced. That surrender was accepted officially on Sept. 2, declared by the president to be V-J Day.

In Chariton, on that Tuesday in May 71 years ago, businesses closed for the day and all who could gathered in the high school auditorium for a program of thanksgiving. It was reported upon as follows in The Herald-Patriot of May 10:

For the most part V-E day was celebrated in a quiet, orderly fashion in Chariton and in Lucas county Tuesday. Coming as an anti-climax to a week or more of peace rumors, the official announcement by President Truman at 8 a.m. merely put the official stamp on what citizens already knew.

Most of the stores and business places in town did not open at all Tuesday morning, that being the pre-arranged plan. Those that did open closed promptly after the announcement.

Promptly at 10:30 a.m. persons from all walks of life and of all religious creeds gathered at the high school audtiorium for the V-E day program of thanksgiving and prayer.

Presiding official at the meeting was Oscar Stafford, who presented the color guard of the American Legion. This was followed by the singing of the doxology. The Rev. J.T. Bloom pronounced the invocation and the audience joined in singing "America."

Responsive reading was led by the Rev. Howard Trask and this was followed by an address by Judge H.V. Levis.

"Battle Hymn of the Republic" was sung by the audience and a unison prayer was led by the Rev. H.W. Meredith, followed by the singing of "America the Beautiful."  The benediction was given by the Rev. Bonte Grussing.

As the years have passed, historians have struggled (and continue to do so) to accurately calculate the human losses of what sometimes is called the last "good" war. More than 60 million people were killed, roughly 3 percent of the world's population. Disease and famine may have pushed the toll over 80 million.

Roughly 6 million of the dead were Jews, systematically slaughtered by the Germans with assistance from their allies.

If the Holocaust definition is broadened to include all who were systematically killed by the Germans the toll climbs to somewhere between 11 and 17 million, including ethnic minorities, prisoners of war, Roma people, the handicapped, gay people and those who fell into many other subcategories.

By some estimates, as many as 5.5 million civilians were killed intentionally by the Japanese regime.

Total military dead during the war is estimated to have ranged between 21 and 25 million. Of those, roughly 400,000 were American. About 300,000 were battle deaths, including prisoners of war who died in captivity.

Roughly 220,000 Japanese died as the result of atomic bombs dropped at President Truman's order during early August, 1945, on Hiroshima and Nagasaki.

We've been treated lately to a great deal of squawking and wing-flapping, declarations from the disaffected that the world is going to hell. But we've already been there.
Posted by Frank D. Myers at 7:14 AM