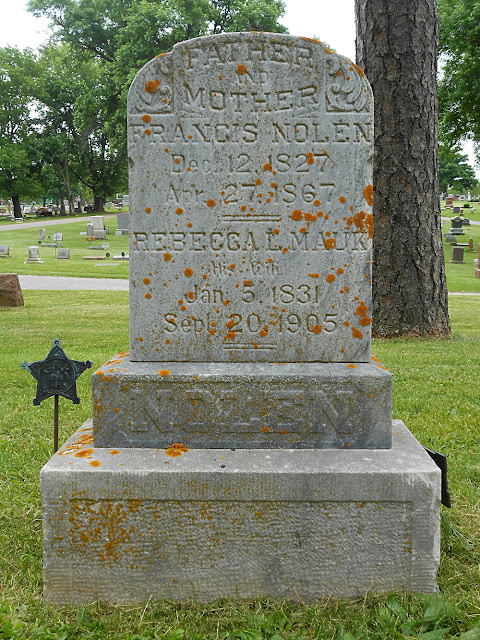 I've written quite a lot about Daniel Iseminger Post No. 18, Grand Army of the Republic (G.A.R.), Lucas County's largest post of this nationwide fraternal organization for Union veterans of the Civil War.

But there were three other Lucas County G.A.R. posts, too --- in Russell, Lucas and Derby.

The largest of the three was Francis M. Nolan (generally called Frank Nolan) Post No. 208, chartered at Russell on March 17, 1886. That's the tombstone (above) in the Chariton Cemetery of Francis Nolen in whose honor the post was named. I'll come back to him later but, yes, the post spelled its surname "Nolan" while the man and his family spelled it "Nolen" --- an oddity that never was resolved.

Frank Nolan Post began with 26 charter members and 80 veterans had belonged by the time it disbanded on Feb. 18, 1920.

Grigsby Foster, after whom the post was named, had served as a farrier in Company E, 7th West Virginia Volunteer Cavalry. A coal miner by profession, he arrived in Lucas between 1870 and 1880 and died there on Feb. 18, 1881. He is buried in Fry Hill Cemetery.

William McKnight, after whom the post was named, had enlisted as 4th corporal in Co. G, 34th Iowa Volunteer Infantry, during 1862. He died near Derby on April 8, 1888, and is buried in Goshen Cemetery.

During October of 1862, when he was 34, Francis enlisted in Company E, 34th Iowa Volunteer Infantry, a unit raised largely in Lucas County. He was commissioned 1st lieutenant on Oct. 15, 1862, under the command of Capt. Nelson B. Gardner. He served until Jan. 11, 1864, when he resigned his commission --- most likely due to ill health --- and returned to Chariton where he died two and a half years later, on April 27, 1867.

Rebecca did not remarry and lived in Chariton until her death on Sept. 27, 1905, age 74. The stone that marks both their graves appears to have been erected after Rebecca's death.

Nice come back from my recent post to you! I'm still digging around to see what else I come up with. Right now comparing what I have to what the sons of Union veterans has on Chariton burial registrations. I have some GAR flag holder burials that I can not find any reference to, maybe you can help? Theodore D. Conway, 1844-1871 in Chariton Cemetery is one, John M. Morris, 1832-1915 is another, William t. Wilson, within the plot of George W. Wilson, is another; I have a stone for D.C. Bowen, who appears to be the wife of N.B. Bowen, but I don't know if he is buried there or not? Grosvenor Taylor, 1838-1908 also has a GAR flag holder and I can't find him on any roster. Ebenezer Badger 1812-1880 is rather old and could be Mexican War, haven't found him as yet. Some of these I may have asked you about in the past and usually if I have an answer that suggests the person is not a veteran I delete the listing, but sometimes it doesn't get done. So if I repeated something you'll have to excuse me for my poor care taking! Steve

Hi Steve --- I'll take a look. Ebenezer Badger was rather old when he enlisted, if the top of my head is remembering right --- and eventually killed himself in despair about something or another. But don't quote me. I'll have to double-check.

Hi! I am desperately trying to find a copy or a picture for GAR Grigsby Foster Post No. 320 Lucas County (Civil War men). In doing some genealogy research for said post information read:" Property: Received loan of photo of group of Post and had it re-photographed by Woltz Studio May 10, 1946-original returned to Ernest Vorhies, Lucas, Iowa May 9, 1946. Letter from A.M.Reid, Sept. 19, 1894 saying he sent $1.44 per capita on 9 members and had receipt for sending in charter and books Aug. 8, 1894. Charter not found on file in this office." Does anyone know of this and/or of the picture of the men? This is very important to me as Grigsby Foster was my Gr.Gr.Grandfather (he wouldn't be in the picture though as the post was established after his death in 1881. His son, James H. Foster should be in it , along with Grigsby's son-in-law, Robert Sheldon Gray, who was my Gr.Grandfather. There have been no pictures available showing Robert and I would dearly love to find one. Any assistance would be greatly appreciated and valued highly. I can be contacted at: lindasheldongrey@hotmail.com
P.S. Fry Hill Cemetery in Lucas, Iowa has the graves for Grigsby Foster/Mary Ann; James H. Foster/Alice; Robert Sheldon Gray grave does not have a tombstone but he is buried next to his first wife who does have one-Sarah A. Gray.

The John M Morris you are asking about is I believe my 3rd great uncle, here is a link to his findagrave memorial https://www.findagrave.com/memorial/41115962